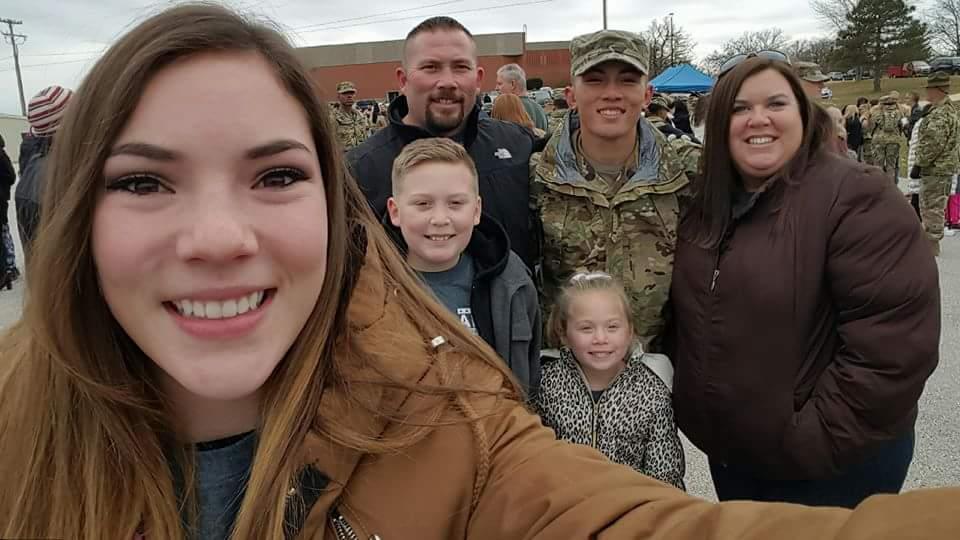 After enlisting in the U.S. Army about eight months ago, Keaton Tilson has learned to appreciate the importance of family and spending time with them.

So when the 19-year-old, who is stationed in Fort Hood, Texas, found out he would have four days off over the Memorial Day weekend, he excitedly called up his mom to share the good news.

However, since he's still new, he warned her that he'd have to wait for an officer's approval.

It wasn't until Thursday evening, the soldier, who hasn't been home since Christmas, was given the green light to travel back home to Granite City, Illinois.

So he hurried to Dallas-Fort Worth International Airport and spent the night there, hoping to get on a 5 a.m. flight with a standby ticket.

"It looked good at first," Tilson's mom, Jennifer, told CBS News. "There were open seats. Then something happened, and he kept missing flights and missing flights."

Frustrated, the teenager asked a gate agent if he had any other options. He brainstormed about flying into a different airport.

She did everything she could to help, but ultimately had to admit, "It doesn't look good."

Hours later, a disappointed Tilson called his mom to update her on his situation.

"I had to keep quiet because he was surprising his siblings," Jennifer said. "I didn't want to tell them in case he didn't come."

Shortly after Tilson hung up, a man walked over to the counter and asked if he could give Tilson his ticket for a flight boarding in 10 minutes.

"I'll go on a later flight," the kind stranger, who was later identified as Josh Rainey, told the agent.

But Rainey was told he wasn't just allowed to switch tickets, especially so close to boarding time. Tilson thanked him for the gesture, assuring him he'd figure things out.

Minutes later, after explaining Tilson's situation to his wife on the phone, Rainey returned with his wallet in hand, offering to pay for the soldier's $375 ticket so he wouldn't miss another minute with his family.

Tilson was in shock as the gate agent processed the ticket and handed it to him. He shook Rainey's hand and repeated, "Thank you! Thank you!"

Then he called his mom, "Somebody just bought my ticket."

"He was emotional. I could tell he probably could've cried -- was trying not to cry," Jennifer said. "Keaton was able to thank the kind man, but I want to personally and publicly thank him as well."

Before taking his seat on the plane, Tilson went back and gave the man a big hug. While chatting, he found out the man lived nearby and they had a common family friend.

With that information, Jennifer was able to track Rainey down and thank him properly.

"I told him how grateful we were," Jennifer said. "He just knew it was the right thing to do. His dad was in the military for 30 years."

Rainey said Tilson's hug was all the thanks he needed.

"That was worth every penny," he said.