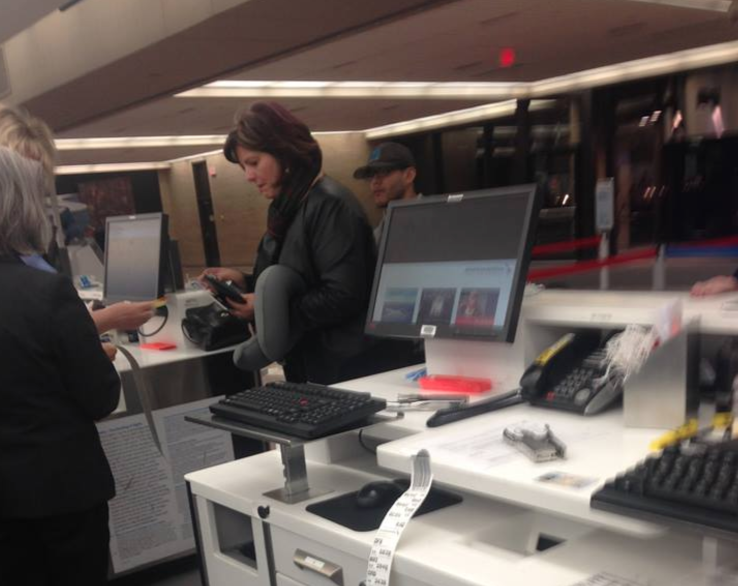 A woman is being praised for lending a generous helping hand to a dad in need when an airline agent denied his toddler daughter a free seat on the plane as he was checking in.

When the man walked up to the counter at an airport in Omaha, Nebraska, last week with his daughter in his arms, the agent asked how old she was. When he replied, “She just turned two,” the agent asked to see her ticket.

The man was confused. He thought his daughter would be able to fly for free. But he soon found out she was over the age limit by just two months.

“He was hit with emotion. He mentioned he couldn’t afford to rebook this flight or get her the ticket with such short notice,” a fellow flier, Kevin Leslie, explained in a post that has since gone viral with more than 45,500 shares on the Facebook page of blogging site “Love What Matters.” “He stepped aside and tried to make a few calls. Hugging his daughter and grabbing his head, you could tell he was heartbroken.”

That’s when an “angel in disguise” stepped in to save the day.

She had overheard the man’s dilemma, and told the agent she wanted to help.

“I wanna buy her ticket,” the woman said, pointing to the little girl.

“You know how much this ticket costs, right?” the surprised agent replied.

Without hesitation, the woman pulled out her credit card and paid for the ticket.

The man was overwhelmed with joy and hugged the woman, repeatedly asking for her name so he could pay her back. But the woman refused, and said, “Don’t worry about it,” before walking away.

Both Leslie and the young father had no idea who the woman was — until Leslie posted about the woman’s act of kindness on Facebook. Within hours, people identified her as Debbie Bolton, the co-founder and global chief sales officer at Norwex.

Norwex confirmed Bolton’s identity to CBS News on Friday, saying they are “very proud” of her.

“We have always appreciated the loving spirit of Debbie Bolton,” Amy Cadora, chief marketing officer at Norwex, told CBS News. “She’s kind, caring and generous. That’s why none of us was a bit surprised when we saw the recent post on social media about her generosity.”

Several employees with the company also praised the woman for her inspiring act.

“I was not surprised,” Cari Flynn, an independent sales consultant at Norwex, told CBS News. “There is not just some ‘glamazon’ or ‘egomaniac’ heading this company; there is a humble person who really cares about people!”

Flynn, who has been with the company for more than 3 years, said she met Bolton at a conference in 2015 where Bolton spoke about working with Mother Teresa when she was 19.

Amber Arnold, who has worked as team coordinator for the company for the past two years, met Bolton back in October, and said this story didn’t surprise her one bit.

“This is story depicts the kind person that Debbie Bolton is,” Arnold told CBS News. “She is incredibly kind, giving, genuine and so humble. ... She leads by example and is walking her talk, every single day. “

Leslie said he shared the story because he believes “people like this need to be heard about.”

“We need more Debbie Boltons in this world,” Arnold said.

Bolton said she just “did what anyone else would do,” and didn’t expect the act of kindness to reach this many people. But since it did, she hopes her action might inspire someone else to make a positive impact in the life of another, Cadora said.

Tennessee couple wakes up to find a strange dog in their bed
More
Thanks for reading CBS NEWS.
Create your free account or log in
for more features.
View CBS News In
CBS News App Open
Chrome Safari Continue
Be the first to know
Get browser notifications for breaking news, live events, and exclusive reporting.