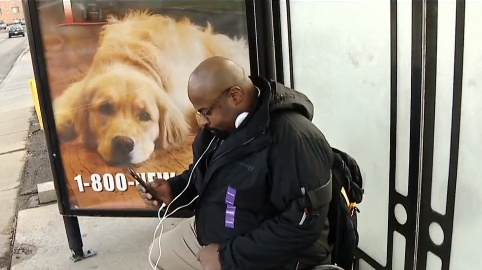 PITTSBURGH -- Police are investigating a man's claim that a stranger temporarily blinded him by throwing a yellow liquid in his face as he was waiting for a bus north of Pittsburgh, CBS Pittsburgh reports.

Bryan Tann said he was at the bus stop by himself, playing a game on his smartphone and listening to music when a man threw the unknown liquid in his face and eyes around 6 p.m. Tuesday.

"All I heard was, 'Hey, what's up?,'" Tann said, according to the station. "Then, I see this glass jar with this yellow liquid, and [he] just throws it right in my face."

He said he stood up and put his hands up "and of course, I couldn't see."

Tann said he stumbled back and then walked to a nearby business to ask for a towel to wipe off his face. That's when he realized that his jacket had been melted by the liquid, according to the station.

He called Scott Township Police and a report was filed, CBS Pittsburgh confirmed. Tann was taken to a hospital for treatment of his burning eyes.

Officers said they were trying to figure out if surveillance video from nearby businesses may have captured footage of the incident.