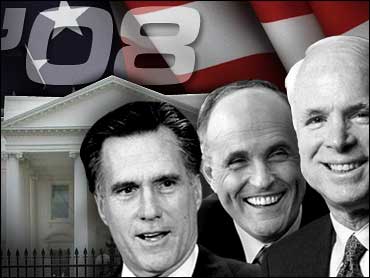 
Another impressive jobs report was released by the U.S. Department of Labor last Friday, but you didn't hear anything about it from the big three Republican candidates for president. They claim to support President Bush's supply-side tax cuts and say they will fight repeal should they be elected to the Oval Office. Yet neither Sen. McCain, nor former-Gov. Romney, nor former-Mayor Giuliani talks about the continued economic benefits of the sweeping tax cuts of 2003.

This is puzzling. It's easy to understand why the leading Democratic candidates are silent on the matter. Sen. Clinton., Sen. Obama, and former-Sen. Edwards intend to overturn President Bush's supply-side program, and would do so with the usual liberal mantra of taxing the rich. But Republican silence is baffling in the real-world laboratory where evidence shows the tax cuts have worked. In particular, taxing capital less has unlocked new investment and unleashed record liquidity to fund business and the stock market, even in the face of money-tightening actions by the Federal Reserve.

Just look at the evidence. Wall Street economist Michael Darda points out that real wages from increased job creation have climbed at twice the speed during this business cycle than in the first 66 months of the previous cycle. Boosted by service-sector job creation, non-farm payrolls grew by 97,000 in February, with a net upward revision of 55,000 for the December and January reports. The median length, or duration, of unemployment fell 8 percentage points in the last year, while non-management wages increased 4.1 percent, almost twice the inflation rate.

The U.S. job-creating machine is firing on all cylinders. Significant GDP-slowing inventory corrections in housing and manufacturing couldn't stop it, nor could unusually bad February weather. Get this: According to Wall Streeter Joe LaVorgna, 505,000 people couldn't get to work because of bad weather last month, the highest number in 10 years and twice the normal seasonal weather effect of the past five Februarys. Yet jobs still rose substantially, and next month's report will likely include another positive payback revision.

It's also a quality jobs boom: Americans with a high-school diploma registered a 4.3 percent unemployment rate (slightly less than the national average), those with some college education had a 3.6 rate, and those with a bachelor's degree or higher had a rock-bottom 1.9 percent rate.

The biggest dilemma in the jobs stats is the 7.1 percent unemployment rate for people with less than a high-school diploma. But taxing the rich will not solve this. Education reform, such as parental school choice and merit pay for teachers, will.

But why the silence from McCain, Romney, and Giuliani on all the good news? Despite the headwinds of war and recession six years ago, the Reagan-Bush tax-cut model has again spurred a long-lasting, job-creating economic expansion. Even Bill Richardson, the Democratic governor of New Mexico who is a card-carrying member of the nearly extinct tax-cutting school launched by JFK, has been silent on all this.

If these presidential contenders truly believe in the tax-cutting model, they should be saying so. The positives are simply too positive to go unspoken. U.S. employment is now a record 146 million, and 9.5 million higher since the expansion started in December 2001, according to Bear Stearns economist David Malpass. The Federal Reserve reports a record $55.6 trillion in household net worth (up 7.4 percent from a year ago) and a record $1.7 trillion in corporate profits (up 20 percent). All this should be shouted from the mountaintops.

And then there's the just-released Forbes list of worldwide billionaires. This list registered a staggering $3.5 trillion in wealth and a record 946 members, up 150 from last year for a 35 percent gain. Almost half the list is comprised of Americans, with significant representation from emerging countries like China, Hong Kong, Mexico, Russia, and Spain.

"This is the richest year in human history," said editor in chief Steve Forbes. The list "is a mere reflection of a dynamic global economy. More people are better off on this earth than ever before."

What's going on here is plain to see: It's the global spread of free-market capitalism. The American model of "cowboy capitalism" — of low tax rates, deregulation, contained inflation, and free trade — is producing unheard of wealth that is turning the have-nots into haves.

Many years ago, British diplomat and political philosopher Isaiah Berlin taught us that while the fox knows many small things, the hedgehog knows one big thing — and that it's the one big thing that always wins the race. Today, the successful worldwide spread of free-market capitalism is the one big idea that puts me solidly in the hedgehog camp. But are there any hedgehogs running for president?

By Larry Kudlow
Reprinted with permission from National Review Online