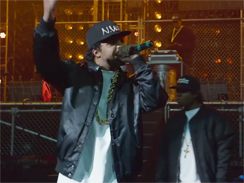 "Straight Outta Compton" has skipped its namesake entirely, because the city has no movie theaters, reports CBS Los Angeles.

The film earned the top spot over the weekend and raked in more than $50 million, but Comptonites will have to leave their city to see the movie that put them on the map. The movie depicts the late 1980s rise of gangsta rap group N.W.A.

"It's a low income area, it's been heavily dis-invested in," USC professor of sociology Manuel Pastor said. "When you live in a community that doesn't have that kind of retail, it's a sign that the community is devalued and people within the community feel devalued."

Compton may not stay theater-less for long. Developers are talking about bringing an entertainment district to the city, including a 16-screen cinema.

The city will benefit from the film no matter what. Dr. Dre, who co-produced the film, said he plans to donate royalties from his album "Compton" to create a new arts and entertainment center for children.