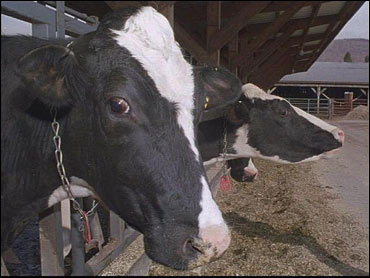 People come to Mark Zinniker's farm for milk they can't find in any grocery store.

Zinniker and his customers believe in the healing power of unpasteurized milk - also called raw milk. But it's illegal to buy, sell or give away in Wisconsin and about half of other states.

"In order for people to drink raw milk, they have to be questioning the system," Zinniker said.

Raw milk producers and drinkers say they are following in the footsteps of organic food enthusiasts, who were once considered a fringe group, said Sandy Falun, president of the raw milk advocate group Weston A. Price Foundation in Washington.

It's impossible to say how much raw milk is being consumed since the practice is illegal in many states, U.S. Food and Drug Administration spokesman Mike Herndon said.

In Wisconsin, farmers cannot sell or give away raw milk, but they can drink raw milk from their own cows on their own farm. Using this loophole, raw milk farmers sell shares in their land, cows or dairy licenses. Then, they give the milk away to shareholders and charge a "handling fee."

Farmers who sell raw milk to the public say they generally get up to $2.50 per gallon, compared to the $2.80 typical cost for a gallon of store-bought. For the farmers, though, that $2.50 is all theirs, compared to getting about $1 per gallon when they sell to a processor.

Raw milk producers and drinkers make a variety of health claims about unpasteurized milk, among them that it soothes arthritis and fights obesity.

"We can go a whole winter here without so much as a sniffle," Hood said. "I think that the more we get back to traditional diets the less problems we're going to have."

Suzanne Gibbons-Burgener, a clinical professor at the University of Wisconsin at Madison, said the health claims haven't been studied very closely.

She said pasteurizing, or heating, the milk is the only way to kill some microbes and hormones that could pass into milk. Milk contaminants could be harmful to the elderly, pregnant women and infants, Gibbons-Burgener said.

Wisconsin Bureau of Food and Safety Inspection director Tom Leitzke said the bureau is considering options on how to deal with raw milk. He wouldn't say what those might be.

"I believe they're providing an unsafe product to an unsuspecting public," Leitzke said.

Leitzke said laboratory tests matched a bacteria in the victims with a bacteria in Wightman's milk tank. Wightman said the state's investigation was biased and flawed, but he temporarily closed his raw milk program.

After a $27,000 yearlong legal battle with the state, Wightman reopened his business by selling a share of his dairy license and registering with the Wisconsin Division of Securities, which regulates those who sell securities in the state.

Today, Wightman's farm serves about 45 families, down from a peak of about 265 families, he said.

"Everybody involved in this has an improved quality of life, including the cows," Wightman said.

Linda Capra, a chiropractor in Menomonee, said she feels safe with raw milk after growing up with it on a farm and drinking it for 50 years. Twice a week she drives 20 miles to pick up four gallons of raw milk for drinking, baking, and making yogurt and pudding for her grandchildren.

"The places I get my milk from see their customers everyday so they're more conscious about cleanliness," Capra said.

Bob Cropp, a dairy marketing specialist, said the state's strict regulations prevent more farmers from selling raw milk. "The raw milk market is far from being saturated, so there is opportunities for farmers out there," Cropp said.