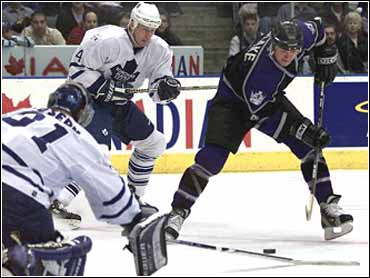 Jamie Storr made his family proud.

"Any time I can play in front of my Dad and my grandmother it's a very special occasion," said Storr, who was born just outside of Toronto. "They've only watched me play in two or three NHL games out of about 150, so today was a great feeling."

Storr's mother died five years ago, and his father has remarried and had other kids making it difficult for him to travel to see his son play.

"My mother can watch me play everyday, but my father has to come to Toronto," Storr said.

Storr didn't need to make any spectacular saves, but was steady throughout.

"I just made all the little ones," he said.

Mathieu Schneider and Jozef Stumpel scored for the Kings, who have won four of five. Luc Robitaille added two assists.

"I thought Storr played real well," Toronto goalie Curtis Joseph said. "His parents were probably here, and everybody was rooting him on."

Gary Roberts scored the lone goal for the Leafs, who have just four wins in 16 games.

"We're just finding a way to lose," Joseph said. "When you're a good team you find ways to win."

Roberts scored his 18th goal, shooting the puck over Storr's left shoulder at 16:02 of the first.

chneider one-timed a shot past Joseph at 1:57 of the second.

Stumpel scored a power-play goal at 10:26 of the second by deflecting Jaroslav Modry's shot from the point past Joseph, who made 16 saves.

Joseph made an impressive stop on defenseman Rob Blake in the first period. Blake blew by defenseman Cory Cross and back-handed the puck in front of Joseph, but he made a sprawling stop.

"He's the real deal," Joseph said of Blake. "He's big and strong, and he showed tonight that's he's great on both ends."