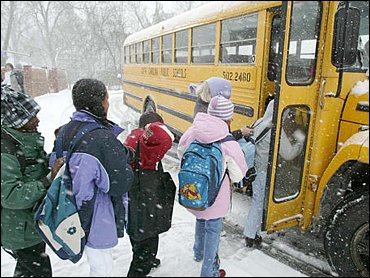 A storm brought snow, sleet and freezing rain to the Southeast on Thursday, shutting down schools and government offices and forcing the cancellation of a visit to Charlotte by President Bush.

More closings were planned for Friday.

"Most everything is shut down, major business and schools," Al Gore, an information technology project manager working from home Friday in Raleigh, N.C., told CBSNews.com. Even though his company was closed for the day, Gore had several business conferences scheduled. "It just shows how virtually connected we are."

Meanwhile, unusually heavy rain in Southern California was blamed for an upsurge in accidents on Los Angeles area freeways Thursday. Two drivers were killed in crashes during downpours.

The unsettled weather in the Carolinas, Georgia, Tennessee and Kentucky left up to 6 inches of snow in some places, with a second wave in the forecast that could add several inches.

In Georgia, which got up to 4 inches in northern counties, high winds brought down trees and power lines, knocking out electricity to as many as 61,000 homes. Most of them were in the Atlanta area, which got up to 2 inches of snow. Power was restored to most customers by the afternoon.

The warnings went up early, reports CBS News Correspondent Joie Chen, but plenty of drivers defied the worst predictions, and found themselves slipping off slick highways across North and South Carolina.

Slick roads were blamed for two fatal wrecks in South Carolina in which vehicles slid into the paths of oncoming trucks. State troopers investigated nearly 600 accidents.

"A lot of people were thinking 'It's kind of late in the season for a big snowstorm, isn't it?'" said meteorologist Eric Thomas of CBS affiliate WBTV Charlotte. "As it turns out, our three biggest snows ever all occurred after Valentine's Day."

Some of the heaviest snow fell in North Carolina's Sandhills, in the south-central part of the state. At one point, snow fell at 2 inches an hour, reducing visibility and forcing officials to send workers home from the Army's Fort Bragg in Fayetteville.

The president canceled a visit to Charlotte.

Schools across much of the region sent students home. Forecasts called for more snow overnight.

John Towe, 53, walked out of a Charlotte hardware store with a plastic sled in hand.

"I told the kids I wasn't coming home without a sled," he said. "And I took a vacation day — it couldn't be any better. We're going to play in the snow."

There was enough snow for three-year-old Harrison Faison to practice his snowman-making skills.

"I like to build snowmens," he told CBS News.

Ten Los Angeles public schools reported damage from leaks, and power was out temporarily for about 27,000 customers, most of them in the San Pedro area.

The storm began Wednesday afternoon and over 24 hours dropped several inches of snow in the mountains, 6 inches of rain in areas of Ventura County, 3 inches in downtown Los Angeles and nearly 4 inches in Beverly Hills.

But communities in mountains left bare by fall wildfires reported no major problems. Emergency crews and residents had set up sand bags and concrete barriers weeks ago to help prevent flash floods or mudslides like those that killed 15 people Dec. 25 in the San Bernardino Mountains.