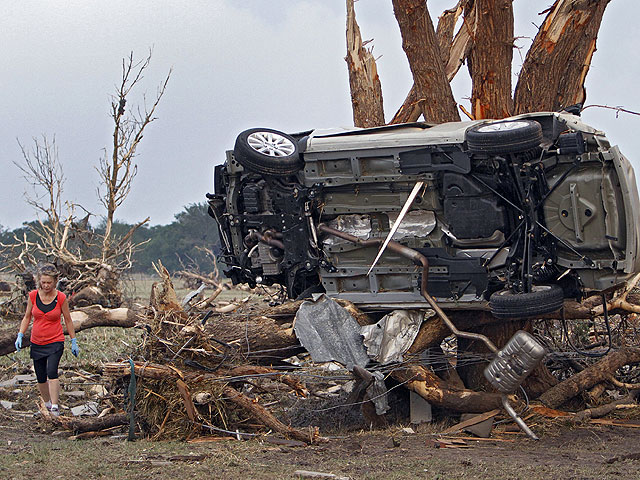 KANSAS CITY, Mo - A violent storm system rumbled through the central U.S. on Wednesday, spawning tornadoes that turned homes into splintered wreckage, killing at least 14 people and hampering rescue efforts in a city slammed by a massive twister days earlier.

The new system, which followed closely behind the one that spawned the massive twister that struck Joplin, Mo., and killed more than 120 people, moved into the Oklahoma City area Tuesday evening as worried commuters rushed home from work.

Several tornadoes touched down in Oklahoma City and its suburbs, killing at least eight people and injuring at least 70 others, authorities said. Among those killed was a 15-month-old boy, and searchers were looking for his missing 3-year-old brother.

The storms killed two people in Kansas and four others in Arkansas, to the east. The National Weather Service issued a tornado warning Wednesday for an area that includes downtown Kansas City, Mo., saying that storms such as one approaching the city from the south have a history of producing funnel clouds. The storm was expected to reach the city's downtown by 12:45 p.m.

The system was centered over Missouri and Arkansas and Illinois early Wednesday and moving into western Indiana, Kentucky, Tennessee and Mississippi. The National Weather Service placed much of Illinois and Indiana under a tornado watch, and said isolated tornadoes were possible throughout Ohio when the storms moved into the state Wednesday night.

The system moved into western Arkansas late Tuesday night, bringing with it a tornado that touched down in several small communities over the span of an hour, flattening or damaging houses and scattering roofing material and other debris over a wide area before dissipating at about 1 a.m. Wednesday.

Winery owner Eugene Post, 83, said as he watched the tornado advance on the town from the porch of his home just outside Denning. He said the lights flickered before the area was plunged into darkness, leaving him only able to listen to the twister's deafening approach.

"I didn't see anything," Post said. "I could hear it real loud though."

Brenda Murders and her husband rode out the tornado in their mobile home in Denning after her daughter called to wake and warn them.

"We jumped up, got as far as the kitchen. There was wind and hail, it destroyed the trailer."

The trailer was still standing, though the roof and wall panels had been peeled away.

Her daughter, Teresa Day, said she and her husband rent mobile homes in Denning. She said all of their renters survived.

In neighboring Altus, May Banhart said everything became really quiet before the hail came.

"All I know is my old man (husband) told me to hit the floor," Banhart said Wednesday as she sat with her family under the section of her carport that still had a roof.

The tornado killed one person each in the towns of Denning, Bethlehem, Strawberry and Etna, authorities said. John Lewis, a senior forecaster at the National Weather Service in Little Rock, said new tornadoes were expected to develop later Wednesday in northeastern Arkansas, southeastern Missouri, and the western parts of Kentucky and Tennessee.

A rural fire station in Franklin County was left without a roof as emergency workers tended to the wounded. Downed trees and power lines tossed across roadways also slowed search-and-rescue crews' efforts.

Renee Preslar, a spokeswoman for the Arkansas Department of Emergency Management, said the threat of more severe weather could delay efforts to assess storm damage.

The twisters that struck the Oklahoma City area killed five people in Canadian County, two in Logan County and one in Grady County, said Cherokee Ballard, a spokeswoman for the Oklahoma Medical Examiner's office. A weather-monitoring site in El Reno recorded 151 mph winds.

CBS News correspondent Rebecca Jarvis reports that up to 100 homes were splintered in the hard-hit town of Piedmont, some 20 miles northwest of Oklahoma City and vehicles were thrown about like toys tossed from a stroller.

Mayor Valerie Thomerson said searchers were looking for a 3-year-old boy whose 15-month-old brother was killed and whose mother and another sibling were seriously injured.

"My husband and I were driving around yesterday and went past a house and there was a vehicle in the pond in the front yard. The only way I could tell it was a vehicle was I could see four wheels above the water. It was a crushed ball," Thomerson said Wednesday.

"We have anything from houses that have shingles blown off, to half the house missing, to the house being completely wiped out, gone," Thomerson said.

Some residents said they had been warned about the impending weather for days and were watching television or listening to the radio so they would know when to take cover.

"We live in Oklahoma and we don't mess around," Lori Jenkins said. "We kept an eye on the weather and knew it was getting close."

She took refuge with her husband and two children in a neighbor's storm shelter in the Oklahoma City suburb of Guthrie. When they emerged, they discovered their carport had been destroyed and the back of their home was damaged.

Chris Pyle was stunned as he pulled into the suburban neighborhood near Piedmont where he lived as a teenager. His parents' home was destroyed, but the house next door had only a few damaged shingles.

"That's when it started sinking in," he said. "You don't know what to think. There are lots of memories, going through the trash tonight, finding old trophies and pictures."

His parents, Fred and Snow Pyle, rode out the storm in a shelter at a nearby school.

At Chickasha, 25 miles southwest of Oklahoma City, a 26-year-old woman died when a tornado hit a mobile home park where residents had been asked to evacuate their trailers, Assistant Police Chief Elip Moore said. He said a dozen people were injured and that hundreds were displaced when the storm splintered their homes.

In Kansas, police said two people died when high winds threw a tree into their van around 6 p.m. near the small town of St. John, about 100 miles west of Wichita. The highway was shut down because of storm damage.

In Joplin, Mo., late-night tornado sirens sent residents scurrying for cover, briefly hampering the painstaking search for survivors of Sunday's twister before brushing past the city without causing serious problems. Sunday's storm was the nation's eighth-deadliest twister among records dating to 1840.

The storms also blew through North Texas, but the damage seemed to be confined to roofs and trees and lawn furniture and play equipment.