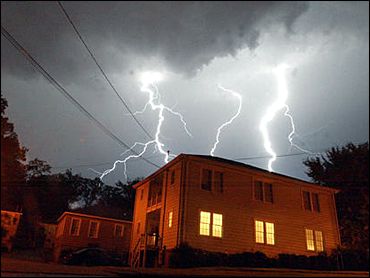 High winds and heavy rains have damaged hundreds of houses, stalled cars, breached small dams, downed power lines and closed roadways from spots in the Midwest all the way to the Eastern Seaboard in an onslaught of severe weather since Monday.

At least two dozen people were injured, one critically, during storms Thursday, and 50 homes in a development in Campbelltown, Pa., about 18 miles east of Harrisburg, were damaged. Authorities were trying to determine whether a tornado was responsible.

Ronnie Fisher said she had only seconds to grab her five children and run like hell.

Her neighbor Steve Hitz could swear he saw a funnel cloud coming down the street.

"I had three big trees here and the wind tore them down like paper bags," he told CBS News.

Most people were still at work when the storms hit Campbelltown, reports CBS News Correspondent Kelly Cobiella. Two dozen were rushed to the hospital, and while many had cuts and bruises, only one person was in critical condition. In the words of one emergency worker, it's a miracle no one died.

The storms wreaked havoc with airline schedules as well, delaying flights Wednesday to New Jersey's Newark Liberty International Airport by more than three hours. Other airports along the East Coast — in Baltimore, Washington, Boston, New York and Philadelphia — experienced delays up to an hour.

In Lumberton, N.J., National Guardsmen allowed residents back into their homes Thursday morning, as receding floodwaters lessened fears of electric shock and illness from contaminated water.

Guardsmen checked identifications of some of the approximately 200 people before allowing them to return. Federal Emergency Management Agency inspectors had checked residences to ensure their structural safety.

Heavy floods spawned by torrential rains Monday into Tuesday burst 12 dams around Burlington County and forced more than 750 people from their homes.

The county, which stretches east from Philadelphia through the south-central part of the state, received more rainfall from a line of thunderstorms that passed through Wednesday night, with most areas receiving 1/4 to 1/2 inch, said Dean Iovino, a meteorologist with the National Weather Service in Mount Holly.

Authorities determined the dam was in danger of collapse from a buildup of water. The Pemberton Township mayor ordered the evacuation of 32 families, said Burlington County spokesman Dave Wyche.

"The big thing is letting people know before they go to bed," Wyche said. "You don't want to wake up floating."

The National Weather Service said Clarks Mills, Wis., was hit by a tornado Tuesday afternoon with winds of at least 73 mph. Meteorologist Gary Austin said the tornado skipped along a path 4.5 miles long, damaging a dozen houses and farm buildings. There were no injuries.

As the storms passed through central Illinois, a tornado leveled a manufacturing plant Tuesday at Roanoke and roofs were blown off several houses, officials said.

Workers at Parsons Manufacturing plant in Roanoke, about 20 miles east of Peoria, went to storm shelters before the twister struck, and thanks to the disaster drills, not one was injured.

"I announced over the intercom that everybody needed to take shelter, there was a tornado," Pat Cannon told CBS News Early Show co-anchor Hannah . "Everybody had known where their shelters were. It's posted all over the bulletin boards and in offices where everyone is to go."

The shelters were concrete-reinforced restrooms.

"We heard slamming noises, which were cars being thrown into the building," said welder Bill Reed. "And I was kind of standing up at the time, and I looked up and the ceilings were just jumping up and down and the walls were rocking back and forth."