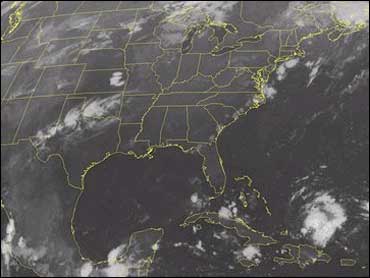 Tourists were told to evacuate the lower Florida Keys on Sunday as a new tropical depression strengthened over the Bahamas and moved toward the vulnerable, low-lying island chain.

A hurricane watch was posted for the entire Florida Keys.

"It does look like that there is the potential for it to become a hurricane, near or just before it reaches the Florida Keys," said Daniel Brown, a meteorologist at the National Hurricane Center.

The watch means that hurricane conditions with sustained wind of at least 74 mph are possible by late Monday, according to the Miami-based hurricane center.

Long-term forecasts show the system heading generally toward the west in the Gulf of Mexico toward Texas or Mexico later in the week, but such forecasts are subject to large errors. That means that areas ravaged by Hurricane Katrina could potentially be in the storm's path.

"Once it reaches the Gulf, really everybody should pay attention at that point," Brown said.

Monroe County emergency management officials told visitors to leave islands extending from the Dry Tortugas west of Key West to the Seven Mile Bridge near Marathon. The islands are connected to each other and the mainland by a single highway.

Hundreds of motorcyclists were in the Keys for an annual event, but most were leaving Sunday, senior emergency management director Billy Wagner said.

The 18th depression of the Atlantic hurricane season formed late Saturday east of the Turks and Caicos Islands late Saturday.

Hurricane Dennis brushed by the Keys in July, flooding some Key West streets, toppling trees and knocking out power. Thousands of people were told to evacuate then, too, but the area was spared from major damage as the worst weather remained offshore. Dennis then struck a direct blow on the Florida Panhandle

Dennis was one of six hurricanes to hit Florida in the last 13 months. Last year's four hurricanes killed dozens of people and caused $19 billion in insured losses in Florida alone.