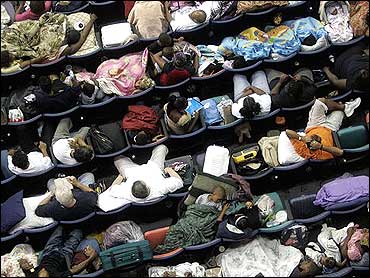 Pelting rain and howling wind from Hurricane Katrina peeled holes in the roof of the Superdome on Monday morning as thousands of New Orleans' evacuees huddled inside seeking shelter.

Pieces of metal sheared off, leaving two holes that were visible from the floor. Water dripped in and people — many of whom are among the city's poor, ill and weak — were moved away from about five sections of those seats.

At least two large holes began letting water in at around 8 a.m. Monday as the storm neared its peak outside, CBS News correspondent Lee Cowan reports from the Superdome. Smaller leaks dot the dome, but the two largest holes are rectangular, more than 15 feet long.

"I can see sky through it," Cowan told CBSNews.com. "I can see pieces of roof flapping in the wind."

Photos from inside the Superdome
Superdome and government emergency officials stressed that they did not expect the huge roof to fail because of the relatively small breaches, each about 15 to 20 feet long and 4 to 5 feet wide.

The holes were in an area of vents some 19 stories above the arena floor.

"We think the wind somehow got into the vents and got between the roof's (waterproof) membrane and the aluminum ceiling tiles," said Doug Thornton, regional manager of the company that manages the huge arena.

The building's general manager said workers cannot tell yet if there are more holes than the two visible ones. He says that'll have to wait until the storm passes.

The dome was filled with the sound of metal rattling, which Thornton said was produced by the metal ceiling tiles.

"I could have stayed at home and watched my roof blow off," said one of the refugees, Harald Johnson, 43. "Instead, I came down here and watched the Superdome roof blow off. It's no big deal; getting wet is not like dying."

In addition to the two holes, water was leaking in through many other areas, including elevators and stairwells, as the wind forced water in through any small opening.

Refugees sitting below the tears in the roof were moved across the arena. "We wanted to keep them dry and we also wanted to make sure nothing fell on them," Thornton said.

Aside from the tear in the huge roof, the 77,000-seat steel-framework stadium, home of the NFL's New Orleans Saints, provided few comforts but at least had bathrooms and food donated by charities.

The wind that howled around the dome during the night was not heard in the interior of the building where the refugees were kept.

"Everybody slept last night. They didn't seem to have any problems," said Dr. Kevin Stephens Sr., in charge of the medical shelter in the Superdome. "They slept all over the place."

But the small comforts of the emergency shelter won't last long, CBS News correspondent Dave Price reports from the Superdome for The Early Show. Despite winds hitting the sides of the Superdome with the speed of highway traffic, the big issue is water. Even if the water comes in, it could be impossible to get out of the area in time, Price reports.

National Hurricane Center Director Max Mayfield warned that New Orleans would be pounded throughout the day Monday and that Katrina's potential 20-foot storm surge was still more than capable of swamping the city.

To get into the massive shelter over the weekend, residents lined up for blocks, clutching meager belongings and crying children as National Guardsman searched them for guns, knives and drugs.

Power failed in the Superdome around 5 a.m. Monday, triggering groans from the crowd. Emergency generators kicked in, but the backup power runs only reduced lighting, not the air conditioning.

The inside of the Superdome quickly became very hot and muggy, and some floors became wet and very slippery.

"It's not very comfortable now and it's going to get more uncomfortable, but it is safe," Thornton said.

The Superdome opened its doors at noon Sunday, and New Orleans' most frail residents got priority. The stadium is by far the most solid of the Big Easy's 10 refuges for the estimated 100,000 city residents who don't have the means, or strength, to join a mandatory evacuation.

"They hadn't opened up and let us in here, there'd have been a lot of people floating down river tomorrow," said Merrill Rice, 64. "If it's as bad as they say, I know my old house won't stand it."

Residents lined up for blocks, clutching meager belongings and crying children as National Guardsman searched them for guns, knives and drugs.

Then Katrina's rain began, drenching hundreds of people still outside, along with their bags of food and clothing. Eventually, the searches were moved inside to the Superdome floor, where some people wrapped themselves in blankets and tried to sleep.

More than 600 people with medical needs were inside. "And we sent another 400 to hospitals," said Gen. Ralph Lupin, who commands the 550 National Guard troops in the Dome.

"We've got sick babies, sick old people and everything in between," Stephens said. "We're seen strokes, chest pain, diabetes patients passing out, seizures, people without medicine, people with the wrong medicine. It's been busy."

Thornton worried about how everyone would fare over the next few days.

"We're expecting to be here for the long haul," he said. "We can make things very nice for 75,000 people for four hours. But we aren't set up to really accommodate 8,000 for four days."

Morris Bivens, 53, a painter, came to the dome with his wife, daughter and five granddaughters ranging in age from 1 to 9.

"I had to come," he said. "Not for me. I ride these out all the time. But I knew I couldn't save those children in this one if something happened."