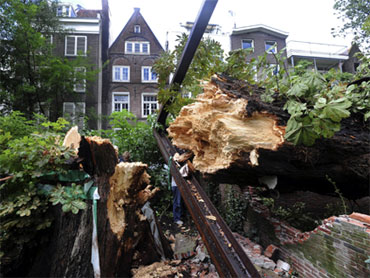 The monumental chestnut tree that cheered Anne Frank while she was in hiding from the Nazis was toppled by wind and heavy rain on Monday.

The once mighty tree, now diseased and rotted through the trunk, snapped about 3 feet above ground and crashed across several gardens. It damaged a brick wall and several sheds, but nearby buildings - including the Anne Frank House museum - escaped unscathed. No one was injured, a museum spokeswoman said.

"Someone yelled, 'It's falling. The tree is falling,' and then you heard it go down," said museum spokeswoman Maatje Mostart. "Luckily no one was hurt."

A global campaign to save the chestnut, widely known as The Anne Frank Tree, was launched in 2007 after city officials deemed it a safety hazard and ordered it felled. The tree was granted a last-minute reprieve after a battle in court.

The 150-year-old tree suffered from fungus and moths that had caused more than half its trunk to rot.

Two years ago city workmen encased the trunk in a steel support system to prevent it from falling, but that failed under windy weather Monday.

The Netherlands' Trees Institute, one of the most prominent supporters of the preservation project, said it was "unpleasantly surprised" by the news of the tree's fall early Monday afternoon.

"On the advice of experts in tree care, it had been calculated that the tree could live several more decades" with the support structure, the institute said in a statement.

"Alas, in the event it seems that nature is stronger."

The institute said it didn't know why the support structure had failed.

Many clones of the tree have been taken, including 11 planted at sites around the United States and 150 at a park in Amsterdam. It is not clear whether a new tree will replace the original one on the same spot, since it rests on property belonging to a neighbor.

The Jewish teenager made several references to the tree in the diary that she kept during the 25 months she remained indoors until her family was arrested in August 1944.

"Nearly every morning I go to the attic to blow the stuffy air out of my lungs," she wrote on Feb. 23, 1944. "From my favorite spot on the floor I look up at the blue sky and the bare chestnut tree, on whose branches little raindrops shine, appearing like silver, and at the seagulls and other birds as they glide on the wind."

She also wrote: "As long as this exists, ... and I may live to see it, this sunshine, the cloudless skies - while this lasts I cannot be unhappy."

Anne Frank died of typhus in the Bergen-Belsen concentration camp in March 1945. Her diary was recovered and published after her death. It has become the most widely read document to emerge from the Holocaust.
By Associated Press Writer Toby Sterling