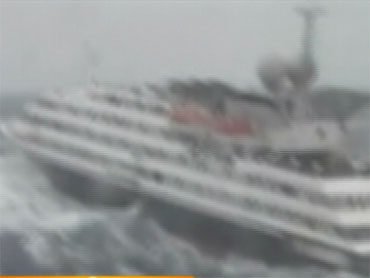 An Antarctic cruise ship that broke down during a rough storm was slowly returning to its home port in Argentina Wednesday with 160 people on board.

The captain said that, in nearly 160 trips to the Antarctic peninsula, he had never seen such weather.

The ship declared an emergency when it lost power and communications after a 30-foot wave washed over the deck and took out windows on the bridge in 55 mph winds.

None of the passengers, all of them American, was injured.

The ship was sailing from the Antarctic peninsula back to Argentina through the Drake Passage, one of the roughest stretches of water in the world.

Video of the Clelia II bobbing in high waves was filmed from another ship, the National Geographic Explorer, which saw the Clelia II in distress and stopped to monitor the situation. Crew members were able to rig a line to send a satellite phone over to the crippled ship.

The Clelia II was heading for home on reduced engine power.

The ship is operated by Polar Cruises of Bend, Oregon.

It was going to the port of Ushuia at the extreme south of Argentina at about 5 mph and was accompanied by a naval vessel, the Argentine Navy said.

The ship set out from Ushuaia on Nov. 30 and was scheduled to return on Wednesday.

To see the video shot by the other ship, click below: