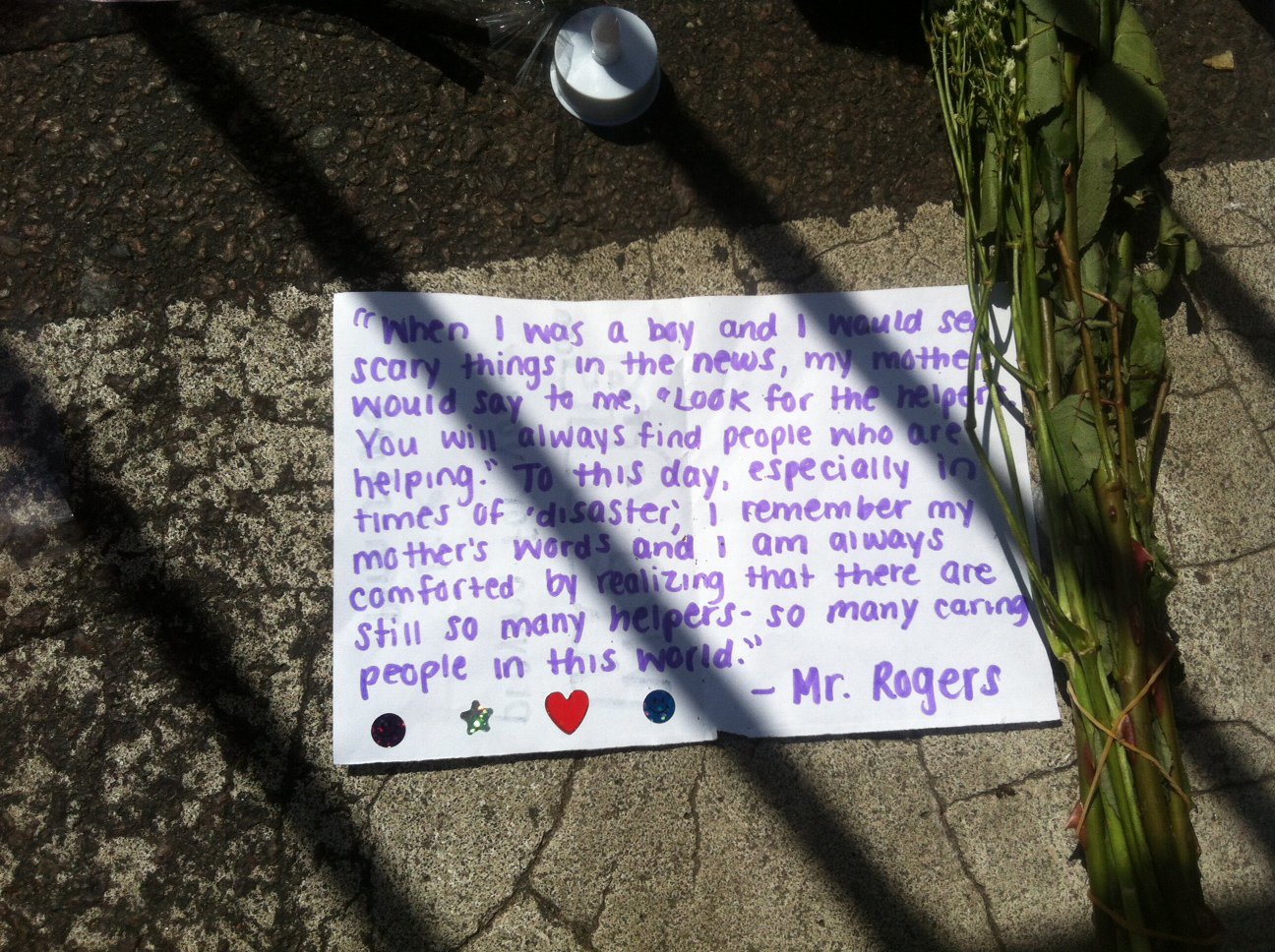 Amid the unfolding tragedy of the Boston Marathon bombings, acts of heroism and tales of kindness have highlighted the city's resilience.

Twitter is full of accounts of ordinary people helping each other out, marked with the hash tag #bostonhelp.

One of the first photos to go viral after the bombings was of a man in a wheelchair with horrendous leg injuries. Running alongside him was Carlos Arredondo, a Costa Rican immigrant who lost his son fighting in Iraq.

Wearing a distinctive cowboy hat, Arredondo ran in and out of the crowds to help the injured, gaining the nickname "Boston Cowboy" across the social media platforms where stories of his heroism have been shared.

There are also the unnamed heroes, such as the man in a red T-shirt and baseball hat, leaning over a visibly injured woman lying on the ground as a photograph was taken of the scene.

Firefighter James Ploude is another hero whose actions were caught on camera; he was photographed running through the crowds with an injured woman in his arms.

Former New England Patriot Joe Abruzzi, who was also photographed carrying a woman to safety, was not speaking directly about his act but released this statement:

"Marathon Monday should be about uplifting stories, personal challenges and fundraising milestones, but today's bombings irrevocably changed that. While I appreciate the interest in hearing our perspective on today's horrific events, the spotlight should remain firmly on the countless individuals -- first responders, medics, EMTs, runners who crossed the finish line and kept on running straight to give blood, and the countless civilians who did whatever they could to save lives. They were the true heroes. Our thoughts and prayers go out to all those affected by this senseless tragedy."

Ali Hatfield, a runner from Kansas City, Mo., posted a photo of the food and drink she and her friends were offered by a couple who invited them into their home as the situation developed; they could not get back to their hotel because of the chaos.

Bobby Morris, a product manager based in Boston, listed his number among thousands of others in a google doc. set up to offer help and shelter for anyone in need.

His ad: I have a couch and blowup mattress that anyone is welcome to use. I have two cats, so not good if you are allergic. I am within walking distance of Copley Square.

"I lived in Atlanta when Katrina hit and I posted a message on a board like this and I had three people contact me, and a 21-year-old and a 22-year-old came and stayed with me for a week and I was incredibly impressed in the wake of what they had gone through, how they had packed everything in a small car, how resilient they were. I had done it before and had a positive response from it and it made me realize people are strong and it made me want to do it again," Morris told CBSNews.com.

Museums in Boston such as the Institute of Contemporary Art and the Museum of Fine Art were offering free entry Tuesday as a respite from the chaos; free yoga classes across the city were also on offer.

Businesses did their bit to help too. Several airlines waived fees for flight changes in and out of Boston and phone companies expanded their network capacities to meet the heightened demand. Restaurants such as McDonald's and El Pelon Taqueria offered free food and WiFi for those in need.

"We were working, it was a busy day for us. After we heard ... we saw people on phones who couldn't get reception, couldn't get their phones charged, they needed to drink something and eat and see another human being," said El Pelon Taqueria owner Jim Hoben to CBSNews.com.

"People were really grateful, everybody was in shock really but people just came and sat down and wanted to get hold of loved ones and have something to drink and to eat and look for other people," said Hoben.

Hoben said he gave his staff the option to go home to be with loved ones. "I gave them all the chance to go home but not only did everyone stay but those who had the day off came in," said Hoben.

There were also tales of marathon runners finishing the 26.2 miles and heading directly to local hospitals to donate blood. The Red Cross tweeted a thank you to all the blood donors but saying that they had received enough blood for the time being.