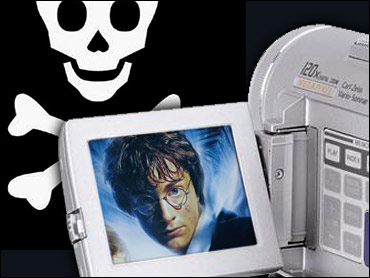 No, they are not Lord Voldemort's Death Eaters — but they sure could give you a scare.

Vue Cinemas said its staff will spend all two hours and 22 minutes of the film "Harry Potter and the Prisoner of Azkaban" scanning the theaters in an effort to uncover anyone trying to secretly record the film.

The goggles were distributed to Vue cinemas around Britain, along with copies of the film, by Warner Brothers. The company is determined to fight back after a deluge of poor quality copies of the first two Harry Potter movies hit the black market.

"It is an incredible response and makes you realize why the distributors are so keen to protect the film from pirates," said Jamie Graham, who manages a Vue complex in Ellesmere, central England. "I have been working in the cinema industry for 10 years and I have never heard of anything like this before."

Graham said his theater had sold 6,500 tickets before 9 a.m. for screenings of the movie, which opened Monday in Britain.

"Our ushers are using the goggles in every screening to check nobody is making any illegal recordings," he said. "If anybody is caught, then they will be reported to the police."

The popularity of the Harry Potter movie franchise shows little sign of dwindling, with hundreds of fans turning out for the premiere of the new film Sunday night in London's Leicester Square.

The movie opens June 4 in the United States.