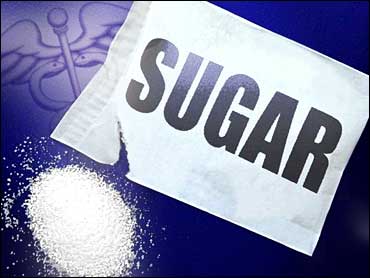 The average American consumes almost 160 pounds of refined sugar each year -- a 25 percent increase over the past three decades.

It's a statistic that worries nutritionists. But cutting back on sugar consumption can be very difficult. The Saturday Early Show's Dr. Mallika Marshall provided some tips on how to fight sugar cravings.

Research in animals suggests that sugar may have some addictive properties. In fact, a recent study from Princeton University found rats given too much sugar actually suffered from withdrawal when the sugar was taken away. And they continued to crave sugar for weeks afterwards. But so far, there have been no concrete studies done in humans to prove that it's really addictive like alcohol and drugs.

Sugary foods often contain a lot of fat -- usually saturated fats or trans fats, which can increase the risk for heart disease and diabetes. Eating a lot of sugar can also cause weight gain, which has its own health risks. And then, of course, sugar can cause tooth decay.

Don't Skip Meals
When you skip a meal, your energy level drops. As a result, you body begins to crave high-sugar foods to give you a quick energy boost. If you eat a number of small meals in a day, you'll have fewer cravings.

Eat Natural Sugars
If you find that you're craving a bowl of ice cream or a piece of candy, grab a piece of fruit instead. Fruit will not only satisfy your sugar craving, but it also contains fiber. The fiber will slow down the absorption of sugar in your body and help keep your blood sugar from rising too quickly, which can actually lead to even more sugar cravings.

Seek Out Substitutes
There are a number of sugar substitutes on the market, such as aspartame, which is found in Equal, and saccharin, which is found in Sweet and Low. A lot of foods such as ice cream and frozen yogurt are sweetened with these products. And, these artificial sweeteners are generally safe. But, people with a rare condition called phenylketonuria should not eat aspartame.

Brush And Gargle
As a tip to help stop craving for dessert after a meal, Marshall recommends brushing or gargling with an antiseptic mouthwash right after eating. Sugary foods don't taste good right after you've brushed your teeth or gargled.

Don't Buy Sugary Foods
Many people crave sugary foods late at night when the body's ability to resist is lower. So, Marshall says, avoid keeping foods such as ice cream and cookies in your house. If the food isn't there to begin with, you can't eat it.

Take A Walk
Many people eat dessert after a meal. But instead, Marshall says try taking a walk. Eating sugar can raise your serotonin levels, which can elevate your mood. Taking a short walk can have the same positive effect.