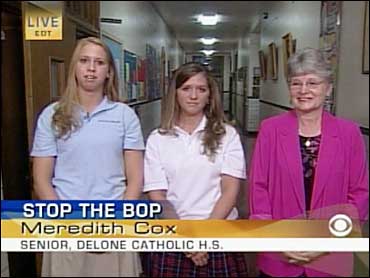 Schools across the country are pitching in to raise money for the victims of Hurricane Katrina.

While there are lemonade stands and bake sales from Connecticut to California, some schools are finding more creative vehicles.

Suggested by a few members of the student council, the school is

playing Hanson's 1996 hit "MMMBop" through the loudspeakers
before classes begin, between periods and during lunch. The idea? Annoy students into donating; have them pay to stop the music.

"MMMBop" has been playing since Wednesday, and the school has raised about $2,300 so far.

Student Council President Meredith Cox and Vice President Maria Landi, both of whom are seniors, came up with the idea.

With the song playing in the background, Landi told The Early Show co-anchor Hannah Storm, "It's pretty annoying. I'm getting kind of sick of it. But we're doing it for a good cause."

The school's principal, Dr. Maureen Thiec, says that when the students approached her with the idea, "I thought, 'Oh, my goodness, the teachers are going to kill me.' But we're making it!"

She says that some of those teachers "have given very generously."

Thiec says the school's receptionist is in charge of the music. "She'll be ever so grateful if she doesn't have to do it anymore," Thiec says.

"We wanted a new, creative way to make money, not just put buckets in classrooms and say, 'Please give us donations,' " Cox says. "So, this is just a different way of getting money out of people. … It has worked thus far: a school of 600 being able to get $2,300 so far. It's working."