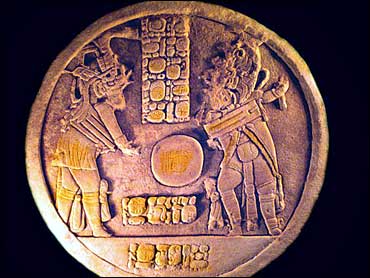 An elaborately carved Mayan altar, more than 1,200 years old, was recovered after archaeologists turned detective and joined Guatemalan police to rescue it from looters.

The rescue of the 600-pound artifact gives researchers vital information on the closing years of the Mayan civilization, archaeologist Arthur Demarest of Vanderbilt University said Wednesday.

The altar was erected in the year 796 as a marker at the end of the royal ball court in the Mayan city of Cancuen, site of one of the largest royal palaces ever found. The altar from the other end of the court was found in 1915 and is in Guatemala's National Museum of Archaeology.

Demarest said looters found the altar, which is much more detailed than the other, after a rainstorm washed away dirt that covered it. They took it away and offered to sell it to collectors.

Demarest announced its recovery at a teleconference arranged by the National Geographic Society, which sponsors his research.

Demarest, who has worked with the local Maya for more than 20 years, said the elders of a village told him about the theft and he called the national police. After months of effort, the altar was found and the looters were arrested, he said.

It will probably be taken to the national museum, Demarest said, adding that copies of both altars will be made for display at the archaeological site to help the local economy by building up tourism.

"The importance of the altar is scientific and archaeological, and it happens also to be a masterpiece of Maya art," Demarest said. "It really talks about the end, the final days of this kingdom, and its greatest king, its last great king."

He said much is being learned as the text on the altar is deciphered, including that the last king of the city is buried nearby. Archaeologists will be looking for that burial site this year, he said.

For the Maya, playing a game on ball courts was a way to finalize a treaty, "like North American Indians smoking a peace pipe or, in modern times, having a photo op to sign a treaty," Demarest explained.

At the time this altar was made, other Maya kingdoms were collapsing but this kingdom was thriving and appears to have taken over a large city nearby, Demarest said.

Federico Fahsen, who interprets the writing on the altar, said in a statement that "Taj Chan Ahk was the greatest in Cancuen's long dynasty of rulers, and his titles on the altar show his aspirations to take control of the whole region during these final decades of classic Maya civilization."

"His strategies allowed him to stay in power and even expand his authority at a time, about A.D. 800, when most of the other Maya kingdoms of the west were collapsing," Fahsen said.