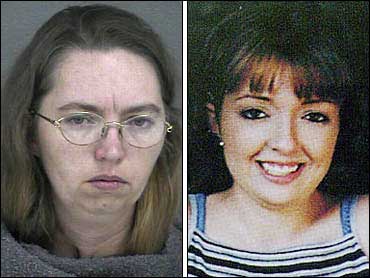 A woman accused of killing a pregnant woman — and cutting the baby from her womb — has appeared in court in Missouri.

It was Lisa Montgomery's initial appearance before a federal judge in Missouri, where she's charged with kidnapping resulting in death.

The hearing lasted less than ten minutes. Montgomery answered a series of questions about whether she qualifies for a public defender. The magistrate judge said it appears that she qualifies.

Montgomery is accused of strangling Bobbie Jo Stinnett — who was eight months pregnant — and cutting her baby girl from her womb on December 16th.

The FBI says Montgomery strangled Stinnett, 23, who was eight months pregnant when she was found dead by her mother on Dec. 16th at her home in Skidmore, Mo., where she and her husband, Zeb, raised rat terrier dogs.

It was that business that put Stinnett in contact with the woman who is now charged with the murder - Montgomery apparently attended dog shows with Stinnett, and both bred rat terriers. Montgomery was arrested hours after the slaying as police followed a trail that began with data on the victim's computer.

Stinnett and her accused killer were apparently photographed together at a dog show months before last week's attack.

Photos on Stinnett's Web site include ones labeled as being from an April 2004 dog show in Abilene, Kansas. One picture shows seven people holding rat terriers: Stinnett at the right, with a purple ribbon, and a woman who resembles Montgomery at the left. There is no caption identifying the people.

Montgomery is scheduled to return to court Thursday for a detention hearing. Prosecutors have already asked that she be denied bond.

She is also involved in a custody flap with an ex-husband, who has been granted temporary custody of their four children.

Authorities say the baby girl was found the day after the attack, with Montgomery and her husband. The infant spent the weekend in a hospital before going home with her father.