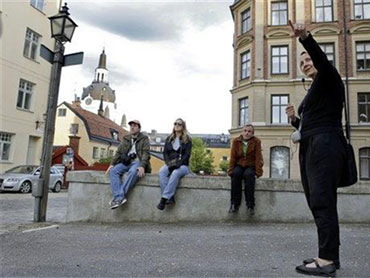 Fans of the late crime novelist Stieg Larsson are getting lost in the Swedish countryside, searching for the quaint town of Hedestad featured in "The Girl with the Dragon Tattoo."

The problem is, it doesn't exist.

But international readers of Larsson's best-selling "Millennium" crime trilogy could be excused for thinking otherwise, because most locations in the books are authentic.

Some of them include the Kaffebar cafe in Stockholm, a favorite haunt of Larsson's fictional journalist Mikael Blomqvist and the Kvarnen bar, where Larsson has tattooed computer hacker Lisbeth Salander spending evenings with her friends from the rock band Evil Fingers.

Both places are located on the trendy island of Sodermalm, a former working-class area with narrow streets where old wooden cottages are squeezed between 20th century stone houses.

The hilly Stockholm district with popular bars, fashion stores and art galleries is one of many islands that form the city center and the home of Larsson's characters.

Blomqvist and Salander, the trilogy's main characters, both have apartments there. Salander's friendly first legal guardian Holger Palmgren also lived there before he was hospitalized.

Eager Millennium fans can take the Stockholm City Museum's Larsson tour, an increasingly popular pastime for aficionados who visit the Swedish capital. Or they can venture out on their own, visiting the scenes of Blomqvist's and Salander's exploits with maps provided by the tourist office.

Starting with Blomqvist's small apartment in the brown 19th century building at 1 Bellmansgatan, Millennium fans can relive the books' plots in the real settings, while listening to the guide's detailed descriptions.

"It is great to identify the addresses and see what the buildings look like," said Roland Ojeda, a retired banker from San Francisco, who took the tour in June with his wife, Linda. "I think it brings it to life."

Larsson's books about a darker side of Sweden, where Blomqvist and Salander become involved in murder mysteries, sex trafficking scandals and a secret government department, have sold more than 30 million copies worldwide.

The tour has attracted visitors from as faraway as Japan, Canada and Australia, said Eva Palmqvist, who leads the museum's tour.

"I think a lot of people want to savor the experience, the story and the characters," Palmqvist said. "I think they want to see this and feel the atmosphere."

During the two-hour walk, Palmqvist guides the group past the scenic Monteliusvagen, a promenade overlooking other islands that are home to some of the more dubious characters in the book. The guide makes the point that Larsson's good characters live in one area, while the evil ones live elsewhere.

"When Stieg Larsson started to write the story in 2001, he decided that Sodermalm, where he also lived, was to become the land of the good people," Palmqvist says, smiling.

"Those that are not presented so nicely, they live in other parts of Stockholm, like Ostermalm, for example," she adds, pointing to the east.

Palmqvist also points out the courthouse where Blomqvist is put on trial in the first book and the home of Salander's second guardian, the evil Nils Bjurman, located in the northern part of Stockholm by Odenplan.

The group continues past a small Lebanese eatery on 22 Tavastgatan, which is believed to be the inspiration for Samir's, the restaurant where Blomqvist dines several times.

From there, it's just a short walk to Kaffebar on the wide, bustling street of Hornsgatan.

The cafe, renamed Mellqvists Kaffebar in 2008, is frequently visited by coffee-quaffing Blomqvist and was also one of Larsson's favorite spots, before he died of a heart attack in 2004 at age 50.

"This is where Lisbeth Salander will ask Mikael for a loan so that she can go to Zurich," Palmqvist chuckled.

The picturesque, hilly streets of Sodermalm have also inspired other writers.

Leading Swedish 20th century authors, such as Ivar Lo Johansson and Per Anders Fogelstrom, both lived here and described the neighborhood's working-class history in classics, including Fogelstrom's "City of My Dreams."

Playwright August Strindberg's famous novel, "The Red Room," also describes Stockholm as seen from a spot in Sodermalm near Salander's 21-room luxury apartment on Fiskargatan 9, where the tour ends.

The tour doesn't quite stretch to Salander's other, gloomy, apartment on Lundagatan at the western end of Sodermalm, or to the Kvarnen bar on Tjarhovsgatan, which Salander regularly visits and where she once kisses another character, Miriam Wu, in front of Blomqvist.

But the places are marked on the map and are worth a visit.

Kvarnen, with its tall ceilings and arched windows, has been in the same spot for more than 100 years. A popular working-class bar and home drinking hole for fans of Hammarby football club, it serves traditional Swedish fare like pickled herring, deer stew and meatballs.

Dedicated Larsson fans may also want to visit Sandhamn in the outer Stockholm archipelago, where Blomqvist has a small cottage that acts as a refuge from his hectic city life.

Then there is always Hedestad often vividly imagined by Larsson's readers but nowhere to be found along the coast north of Stockholm, as described in the books.

Still, there is one way to get to know Hedestad the sleepy town of Gnesta, 45 miles (70 kilometers) south of Stockholm.

This is the place used to illustrate Hedestad in the Swedish movie of Larsson's books, with signs about the town showing filming locations.

"Last year, some Italian guys came here just because of the books," says Jonathan Olsson at Gnesta's tourist office. "We have printed a brochure about the sites."

MILLENNIUM TOUR: http://www.stadsmuseum.stockholm.se. Two-hour tour of sites associated with the Stieg Larsson Millennium crime trilogy, including "The Girl with the Dragon Tattoo." Offered Wednesdays at 6 p.m. or Saturdays at 11 a.m., departing from 1 Bellmansgatan. Tickets are $16 or 120 Swedish kronor and can be purchased at Stockholm City Museum, the Stockholm Tourist Centre, or online at http://www.ticnet.se.

WALKING ON YOUR OWN: Buy the Millennium map for $5 or 40 Swedish kronor at the Stockholm City Museum, or the Stockholm Tourist Centre.