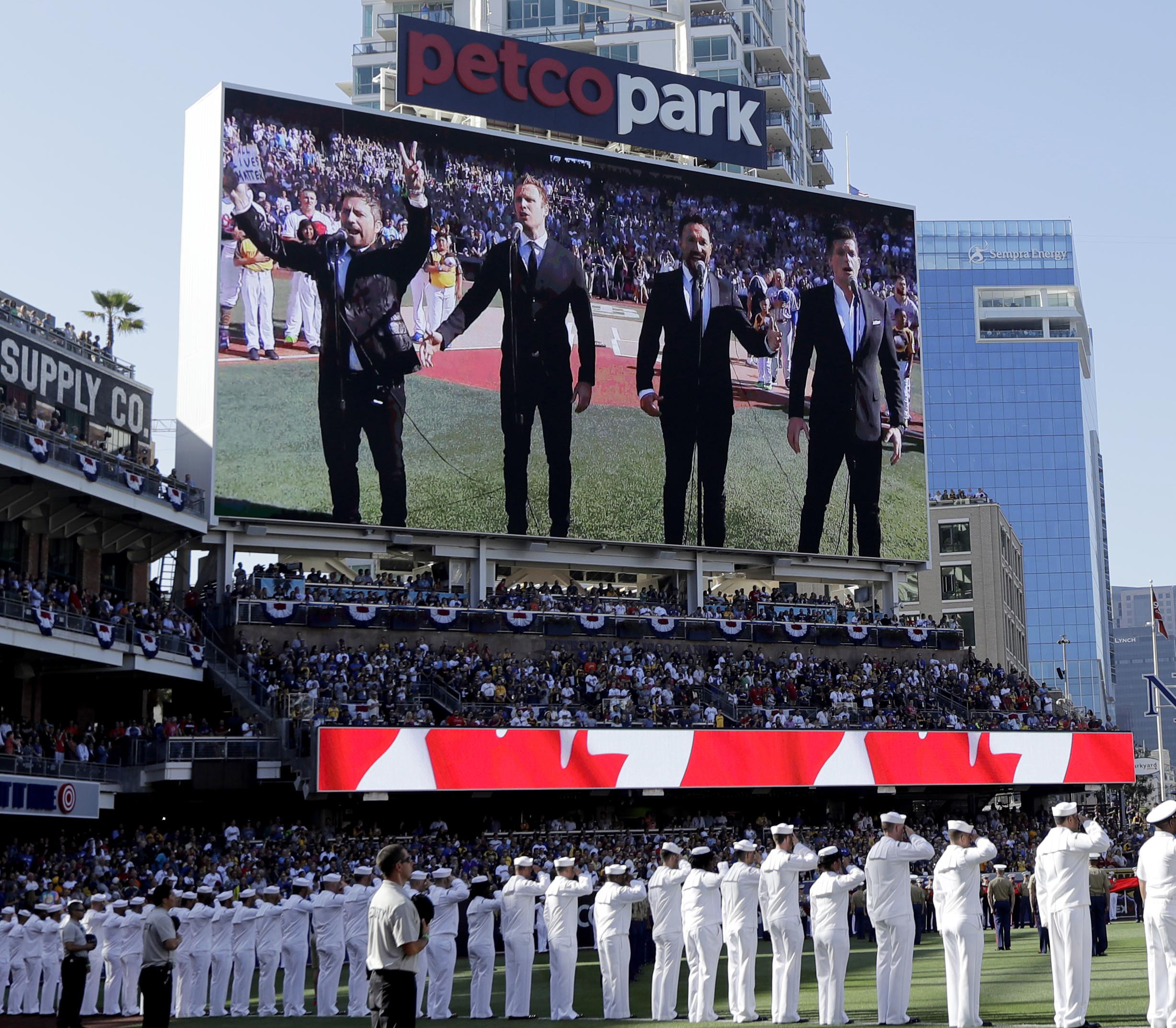 SAN DIEGO -- A member of a Canadian singing quartet changed a lyric in his country's national anthem and held up a sign proclaiming "All Lives Matter" during a pregame performance at the 87th Major League Baseball All-Star Game Tuesday night.

The Tenors, a group based in British Columbia, caused a stir at Petco Park with Remigio Pereira's actions while singing "O Canada."

In a statement issued during the game, the group blamed the changes solely on Pereira, who held up the sign and sang the altered lyrics while the other three singers wordlessly harmonized. The band said Pereira won't perform with The Tenors "until further notice," calling his actions "disrespectful" and "shameful."

The change happened during the middle portion of the anthem, which is often sung in French at sporting events.

Pereira unexpectedly sang: "We're all brothers and sisters. All lives matter to the great."

The normal lyric is "With glowing hearts we see thee rise. The True North strong and free."

"United We Stand" was written on the back of his sign.

"The Tenors are deeply sorry for the disrespectful and misguided lack of judgment by one member of the group acting as a 'lone wolf' today," the Tenors said in a statement posted on their official Twitter page.

"The other members of the group are shocked and embarrassed by the actions of Remigio Pereira, who changed the lyrics of our national anthem and used this coveted platform to serve his own political views. Our sincere apologies and regrets go out to everybody who witnessed this shameful act, to our fellow Canadians, to Major League Baseball, to our friends, families, fans and to all those affected. The actions of one member of this group were extremely selfish, and he will not be performing with The Tenors until further notice."

"Needless to say, the Pereira's decision not only to make a politically charged statement at the All-Star Game but also to alter the lyrics of their country's national anthem figures to be quite controversial," observed CBS Sports Writer Dayn Perry.

Although the audio wasn't crystal-clear at the park, many fans reacted with surprise when they saw the sign on the ballpark video scoreboard. The Canadian anthem wasn't shown live on U.S. television, but it aired in Canada, where the decisions lit up social media with overwhelming criticism of the change.

The Tenors are Pereira, Clifton Murray, Fraser Walters and Victor Micallef. The Juno Award-winning group has recorded multiple platinum albums in Canada while performing around the world, including gigs at the 2010 Winter Olympics opening ceremonies, the 2012 Queen's Jubilee in England and the 2014 Stanley Cup Final.

"All Lives Matter" has become a common online response in recent months to the "Black Lives Matter" movement, particularly after the police shootings of Alton Sterling and Philando Castile.

The motivations and ethnicities of the proponents of the "All Lives Matter" response vary, but it has received heavy criticism. The phrase has been perceived to use reductive reasoning to trivialize the problems specifically facing blacks.