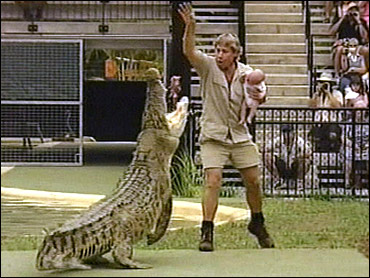 Steve Irwin, the hugely popular Australian television personality and conservationist known as the "Crocodile Hunter," was killed Monday by a stingray while filming off the Great Barrier Reef. He was 44.

Irwin was at Batt Reef, off the remote coast of northeastern Queensland state, shooting a segment for a series called "Ocean's Deadliest" when he swam too close to one of the animals, which have a poisonous barb on their tails, his friend and colleague John Stainton said.

"He came on top of the stingray and the stingray's barb went up and into his chest and put a hole into his heart," said Stainton, who was on board Irwin's boat at the time.

"It's just absolutely unbelievable," Nigel Marven, a well-known wildlife specialist who was a longtime friend of Irwin's, said on The Early Show. "To be killed by a big crocodile or bitten by a snake, you'd have believed it. But a stingray? There's only been three cases in Australia of deaths by stingrays in the last 100 years. Seventeen worldwide. So it's a tremendous freak accident."

Crew members aboard the boat, Croc One, called emergency services in the nearest city, Cairns, and administered CPR as they rushed the boat to nearby Low Isle to meet a rescue helicopter. Medical staff pronounced Irwin dead when they arrived a short time later, Stainton said.

2Irwin was famous for his enthusiasm for wildlife and his catchword "Crikey!" in his television program "Crocodile Hunter." First broadcast in Australia in 1992, the program was picked up by the Discovery network, catapulting Irwin to international celebrity.

He rode his image into a feature film, 2002's "The Crocodile Hunters: Collision Course" and developed the wildlife park that his parents opened, Australia Zoo, into a major tourist attraction.

"The world has lost a great wildlife icon, a passionate conservationist and one of the proudest dads on the planet," Stainton told reporters in Cairns. "He died doing what he loved best and left this world in a happy and peaceful state of mind. He would have said, 'Crocs Rule!"'

Prime Minister John Howard, who hand-picked Irwin to attend a gala barbecue to honor President Bush when he visited in 2003, said he was "shocked and distressed at Steve Irwin's sudden, untimely and freakish death."

"It's a huge loss to Australia," Howard told reporters. "He was a wonderful character. He was a passionate environmentalist. He brought joy and entertainment and excitement to millions of people."

3Irwin, who made a trademark of hovering dangerously close to untethered crocodiles and leaping on their backs, spoke in rapid-fire bursts with a thick Australian accent and was almost never seen without his uniform of khaki shorts and shirt and heavy boots.

"Steve was one of these guys, we thought of him as invincible," Hanna, director emeritus of the Columbus (Ohio) Zoo and Aquarium, told ABC's "Good Morning America" Monday.

Irwin's ebullience was infectious and Australian officials sought him out for photo opportunities and to promote Australia internationally.

His public image was dented, however, in 2004 when he caused an uproar by holding his infant son in one arm while feeding large crocodiles inside a zoo pen. Irwin claimed at the time there was no danger to the child, and authorities declined to charge Irwin with violating safety regulations.

But behind the theatrics was a conservationist: Irwin's TV shows and his zoo in Australia may have been big money spinners but he also poured cash into animal welfare and environmental projects, reports CBS News correspondent Mark Phillips.

Later that year, he was accused of getting too close to penguins, a seal and humpback whales in Antarctica while making a documentary. Irwin denied any wrongdoing, and an Australian Environment Department investigation recommended no action be taken against him.

Stingrays have a serrated, toxin-loaded barb, or spine, on the top of their tail. The barb, which can be up to 10 inches long, flexes if a ray is frightened. Stings usually occur to people when they step on or swim too close to a ray and can be excruciatingly painful but are rarely fatal, said University of Queensland marine neuroscientist Shaun Collin.

Collin said he suspected Irwin died because the barb pierced under his ribcage and directly into his heart.

"It was extraordinarily bad luck. It's not easy to get spined by a stingray and to be killed by one is very rare," Collin said.

News of Irwin's death spread quickly, and tributes flowed from all quarters of society.

At Australia Zoo at Beerwah, south Queensland, floral tributes were dropped at the entrance, where a huge fake crocodile gapes. Drivers honked their horns as they passed.

"Steve, from all God's creatures, thank you. Rest in peace," was written on a card with a bouquet of native flowers.

"We're all very shocked. I don't know what the zoo will do without him. He's done so much for us, the environment and it's a big loss," said Paula Kelly, a local resident and volunteer at the zoo, after dropping off a wreath at the gate.

Stainton said Irwin's American-born wife Terri, from Eugene, Ore., had been informed of his death, and had told their daughter Bindi Sue, 8, and son Bob, who will turn 3 in December.

The couple met when she went on vacation in Australia in 1991 and visited Irwin's Australia Zoo; they were married six months later. Sometimes referred to as the "Crocodile Huntress," she costarred on her husband's television show and in his 2002 movie.