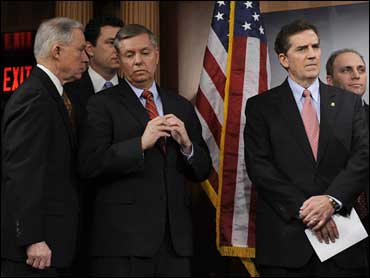 The Senate voted Wednesday night to give a tax break of up to $15,000 to homebuyers in hopes of revitalizing the housing industry, a victory for Republicans eager to leave their mark on a mammoth economic stimulus bill at the heart of President Barack Obama's recovery plan.

The tax break was adopted without dissent, and came on a day in which Obama pushed back pointedly against Republican critics of the legislation even as he reached across party lines to consider scaling back spending.

"Let's not make the perfect the enemy of the essential," Obama said as Senate Republicans stepped up their criticism of the bill's spending and pressed for additional tax cuts and relief for homeowners. He warned that failure to act quickly "will turn crisis into a catastrophe and guarantee a longer recession."

Democratic leaders have pledged to have legislation ready for Obama's signature by the end of next week, and they concede privately they will have to accept some spending reductions along the way.

Sen. Johnny Isakson, R-Ga., who advanced the homebuyers tax break, said it was intended to help revive the housing industry, which has virtually collapsed in the wake of a credit crisis that began last fall.

The proposal would allow a tax credit of 10 percent of the value of new or existing residences, up to a $15,000 limit. Current law provides for a $7,500 tax break for the purchase of new homes only.

Isakson's office said the proposal would cost the government an estimated $19 billion.

Democrats readily agreed to the proposal, although it may be changed or even deleted as the stimulus measure makes its way through Congress over the next 10 days or so.

"This bill needs to be cut down," Republican Mitch McConnell of Kentucky said on the Senate floor. He cited $524 million for a State Department program that he said envisions creating 388 jobs. "That comes to $1.35 million per job," he added.

Republicans readied numerous attempts to reduce the cost of the $900 billion measure, which includes tax cuts and new spending designed to ignite recovery from the worst economic crisis since the Great Depression.

But after days of absorbing rhetorical attacks, Obama and Senate Democrats mounted a counteroffensive against Republicans who say tax cuts alone can cure the economy.

Obama said the criticisms he has heard "echo the very same failed economic theories that led us into this crisis in the first place, the notion that tax cuts alone will solve all our problems."

"I reject those theories and so did the American people when they went to the polls in November and voted resoundingly for change," said the president, who was elected with an Electoral College landslide last fall and enjoys high public approval ratings at the outset of his term.

Obama did not mention any Republicans by name, and most have signaled their support for varying amounts of new spending.

Even so, the president repeated his retort word for word in late afternoon, yet softened the partisan impact of his comments by meeting at the White House with senators often willing to cross party lines.

"I gave him a list of provisions" for possible deletion from the bill, Collins told reporters outside the White House. Among them were $8 billion to upgrade facilities and information technology at the State Department and funds for combatting a possible outbreak of pandemic flu and promoting cyber-security. The latter two items, she said, are "near and dear to her," but belong in routine legislation and not an economic stimulus measure.

Collins and Nelson have been working on a list of possible spending cuts totaling roughly $50 billion, although they have yet to make details public.

The House approved its own version of the stimulus bill last week on a party line vote, but the political environment in the Senate is far different.

Democrats hold a comfortable 58-41 majority. But because the legislation would increase the federal deficit, any lawmaker can insist that 60 votes be required to add to its cost.

While the 60-vote threshold can impose a check on Democrats, it can also illuminate the cross-pressures at work on Republicans.

A Democratic attempt on Tuesday to add $25 billion for public works projects failed when it gained only 58 votes, two short of the total needed. But a few hours later, a proposed $11 billion tax break for new car buyers attracted 72 votes, including several from Republicans.