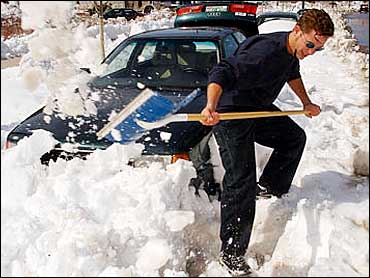 Tens of thousands of people in rural areas remained stranded in their homes Saturday, their food supplies dwindling, after the state's worst snowstorm in 90 years.

Students using the Ritchie Center sports complex at the University of Denver were evacuated Saturday morning because a wall was threatened by heavy snow tumbling off a roof. A women's gymnastic meet scheduled for the evening was postponed.

A suburban Office Depot also was evacuated because of fears the roof would collapse.

Hundreds of home and business roofs have collapsed since the storm, though none has caused serious injuries.

In Jefferson County, where between 50,000 and 75,000 people were snowed in, officials declared a state of emergency. They asked the state for crews, plows and snowmobiles to help clear the roads west of Denver, where up to 11 feet of snow fell.

Jefferson County Administrator Patrick Thompson said some residents had managed to get out by Saturday. "Hopefully, in the next eight to 12 hours we'll have holes punched through so other people can get out."

The U.S. Postal Service hoped to reach 80 to 90 percent of the metropolitan area's residents Saturday. About 75 percent of the area's homes and business got mail on Friday.

Officials also asked for helicopters to reach people in emergencies. Two houses have been lost to fires this week because firefighters couldn't reach them.

"We've been holding out on using the snowmobiles for anything other than medical emergencies," county spokesman John Masson said Friday. "But we're using every last bit of our equipment and crews are working to clear the gravel roads so these people can get out."

Hopkins said the state was helping find private contractors to help with snow removal but that Owens would wait until next week to compile the requests and decide whether to ask for federal funds.

"A snowstorm of this magnitude means everyone needs more equipment, but there are simply no extra resources to be had," Hopkins said. "Generally federal funds aren't available for snow removal. It's something we want to work on."

Clear Creek County officials have been keeping a list of people who may run out of medication. In Custer County in southern Colorado, some residents were unable to get to their barns to feed their horses.

The storm, which began Tuesday, dropped snow over nearly 500 miles in Colorado and southern Wyoming, affecting more than 3.5 million people. At least six people died in both states.

Xcel Energy officials said at least 2,500 Denver area customers and 1,500 foothills residents were still without power and could be until Monday.

Beth Graham, a Lutheran pastor near Conifer, said some of her parishioners responded to calls for help by cross-country skiing to homes. Other volunteers used snowshoes to deliver food and water to stranded residents.

"We waited forever the other days, but they seem to finally have it together," said Kathy Verhaal, 34, of Ogden, Utah. She was waiting at the United Airlines ticket counter for an afternoon flight home.

The heavy, wet snow caved in roofs and awnings at a Denver nightclub and a community center in the mountain town of Nederland. The Denver Fire Department inspected 273 structural collapses reported at homes and businesses, and surrounding cities reported dozens more.

The National Weather Service said 31.8 inches of snow accumulated in Denver, the heaviest snowfall since a December 1913 storm that dumped 47½ inches of snow on the city over five days.