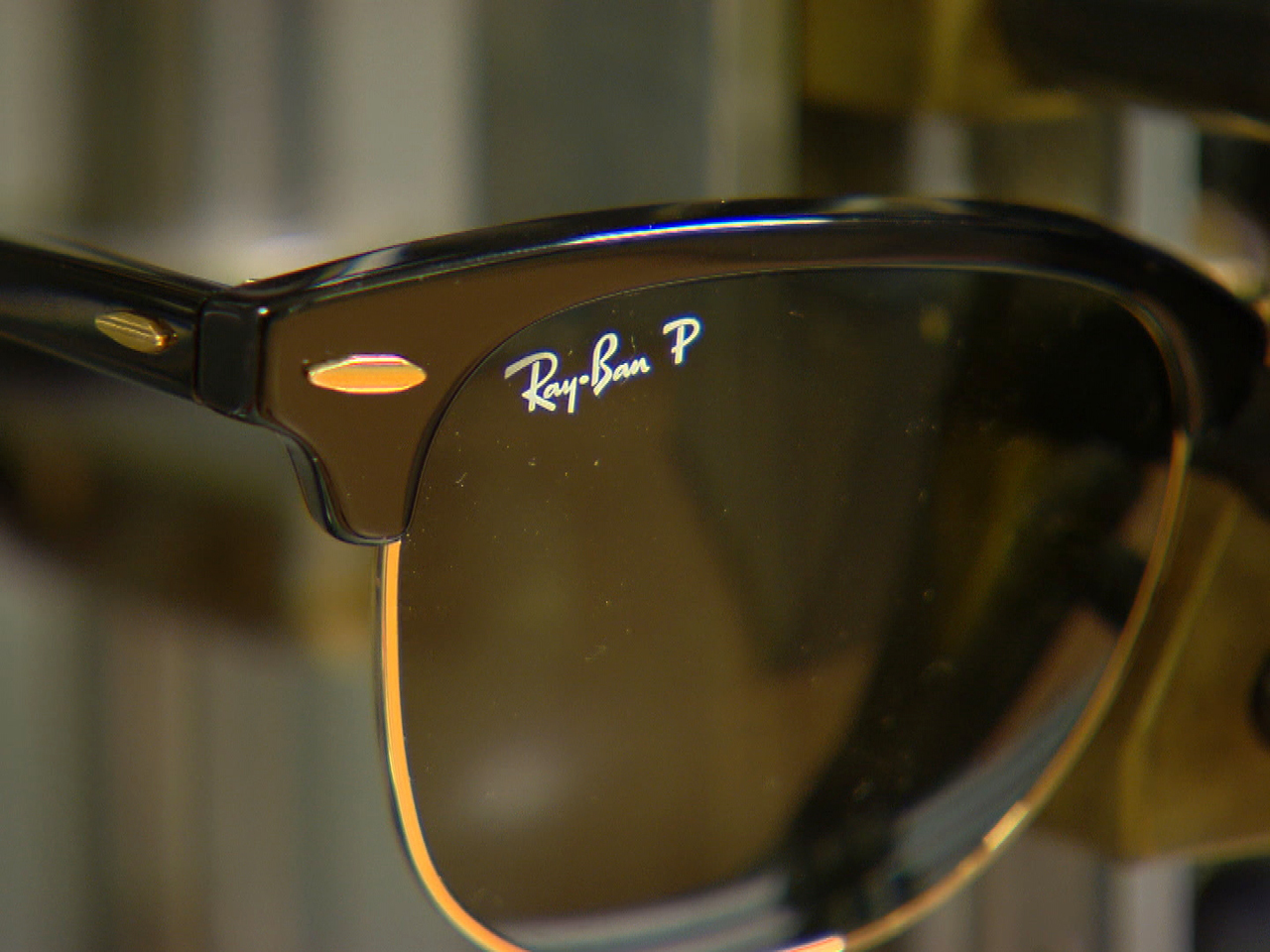 The following is a script from "Sticker Shock" which aired on Oct. 7, 2012, and was rebroadcast on June 16, 2013. Lesley Stahl is the correspondent. Shachar Bar-On, producer.

For many of us, summer means a new pair of sunglasses. But bet your eyes popped when you saw the price tag. If you don't go to places like Walmart or Costco, you could easily be spending hundreds and hundreds of dollars for a pair that cost just $30 10 years ago. Talk about sticker shock!

And it's not as though things have changed that much: they're still made of a couple of pieces of plastic or wire, some screws and glass. Why should a pair of glasses cost more than an iPad? Well, as we first reported in October, one answer is because one company controls a big chunk of the business.

Never has there been so much choice: Ray-Bans, Oakleys, glasses for running, and skiing, and even reading. A staggering variety of colors and designers. You'd think the competition would force the prices down.

One reason it hasn't is a little known but very big Italian company called Luxottica. If you own a nice pair of specs or shades, they're probably theirs. Luxottica is the biggest eyewear company on earth. It shuns publicity, but CEO Andrea Guerra invited us in for a look. And it was eye-opening.

Lesley Stahl: Do you have any idea how many people in the world are wearing your glasses right now?

Andrea Guerra: At least half a billion are wearing our glasses now.

Luxottica started here as a small tool shop in Agordo, a dot of a town in the Italian Alps, when frames were still made of mountain goat horns. This was the factory in 1961. This is what it looks like today.

Last year, Luxottica made 75 million pairs of sunglasses and optical frames. They don't make prescription lenses. We saw mountains and mountains of glasses in boxes headed to China, India, Brazil, and, above all, to the U.S.

Andrea Guerra: They can. This is one of the very few things that are 100 percent functional, 100 percent aesthetical, and they need to be on your face for 15 hours a day. Not easy, and there's a lot of work behind them.

Isabella Sola: Yes. I think so.

Lesley Stahl: I think I look cool too.

It wasn't that long ago that glasses were uncool. You only wore them if you absolutely had to.

Lesley Stahl: I can remember, not that many years ago, my mother telling me that men will never ask me out if I wear my glasses. I was to go blind if I wanted dates.

But Luxottica took this medical device and turned it into high fashion, by making deals to conceive and create high quality, stylish specs for nearly every brand and label you can think of.

Isabella Sola: We have Prada. We have Chanel. We have Dolce Gabbana. We have Versace. We have Burberry. We have Ralph Lauren. We have Tiffany. We have Bulgari...

They're not even called "glasses" anymore. They're "eyewear!"

Lesley Stahl: But you know something: I know that there are some less expensive glasses that look very similar to the very expensive. For example, this is your Vogue line which is not that expensive.

Lesley Stahl: And this is?

Lesley Stahl: Coach, which is much more expensive. If two women walked down the street with these on--

Isabella Sola: But it's almost. It's not the same.

Not the same because of details on the frames like the little Chanel Cs, Polo ponies, or Tiffany blue. Luxottica wouldn't tell us their markup, but glasses like these can sell for up to 20 times what they cost to make. And all the glasses are designed by Luxottica.

Lesley Stahl: So you design thousands of pairs of glasses?

Isabella Sola: We do, yes.

Lesley Stahl: Where does Tiffany come into it?

Isabella Sola: Tiffany comes in at every stage, basically.

The fashion houses send in sketches of their new collections as inspiration. And down on the factory floor, you can see the work that goes into differentiating the brands: plain plastic temples go through a painting machine and come out "Versace!" Stones are inserted one-by-one into the Dolce Gabbana; and leather is carefully threaded for that Chanel-bag look.

Lesley Stahl: But why isn't the Luxottica name a brand name? I mean, are you in any way hiding it?

Andrea Guerra: Not at all. We are listed.

Listed on the New York Stock Exchange where Luxottica shares are soaring. The company raked in $9 billion last year. But their best seller wasn't a fancy fashion house label. It was a brand they outright own: Ray-Ban.

Originally made by Bausch + Lomb for the U.S. Army, since JFK, nearly every president has worn them, not to mention Tom Cruise in "Risky Business" and "Top Gun." But the brand was poorly managed, cheapened, and eventually put up for sale. The Italians bought it in 1999, and had a strategy to turn things around:

Andrea Guerra: We stopped selling sunglasses from Ray-Ban for more or less a year.

Lesley Stahl: When you bought it, you could buy them for, I don't even know how little money--

Lesley Stahl: Twenty-nine dollars at the drug store, at a gas station, and you took them off the market.

Andrea Guerra: We refurbished everything.

And made them upscale: today those $29 pairs can cost 150 and more, and Ray-Ban is the top-selling sunglass brand in the world.

Lesley Stahl: It is the world, and we didn't realize it, that's the thing. Before I started working on this story, I'd never heard the name Luxottica.

Which is all the more surprising since Luxottica not only bought Ray-Ban, they also bought LensCrafters, the largest eyewear retail chain in North America. So now they make 'em and they sell 'em. It's great for business, but is it great for the consumer? I asked LensCrafters' president Mark Weikel.

Lesley Stahl: How many non-Luxottica brands do you sell here?

Mark Weikel: We probably have a few brands that aren't Luxottica.

Lesley Stahl: So since Luxottica owns you, does the consumer get a break on glasses made by them in LensCrafters?

Mark Weikel: What the customer gets at LensCrafters is a variety of services and products, including this broad assortment of frames--

Lesley Stahl: Mark, you're not answering my question. I'm asking if you charge less for frames made by Luxottica since you're the same company.

Mark Weikel: I think every competitor, every retail optical brand, determines what their pricing is on whatever their brands are.

That's a no. Consumers do not get a break. At LensCrafters, the average cost for a pair of frames and lenses is about $300. You may think -- well, there's choice in the mall for other glasses. But Luxottica doesn't only own the top eyewear chain in the country, it owns another large chain: Pearle Vision, and Oliver Peoples, and several boutique chains. And it runs Target Optical and Sears Optical. And we're not done, Luxottica also owns Sunglass Hut - the largest sunglass chain in the world.

Lesley Stahl: So is there a free market in eyewear?

Brett Arends: No, I don't think there really is. I think one company has excessive dominance in the market.

Smartmoney.com columnist Brett Arends says the appearance of variety is an optical illusion.

Consider what happened to Oakley, the world-famous maker of advanced sports eyewear.

Brett Arends: Oakley was a big competitor. And they had a fight with Luxottica. And Luxottica basically said, "We're dropping you from our stores." And Oakley--

Lesley Stahl: They refused to sell their glasses in their stores.

Brett Arends: Yeah, there was a dispute about pricing, and they dropped Oakley from the stores, and Oakley's stock price collapsed. How is Oakley going to reach the consumer if they can't get their sunglasses in Sunglass Hut?

Andrea Guerra: There were some issues between the two companies in the beginning of the 2000s. But both of them understood that it was better to go along.

Lesley Stahl: Better to let you buy them?

Andrea Guerra: I wouldn't say this. We merged with Oakley in 2007.

Lesley Stahl: You bought Oakley. They tried to compete and they lost and then you bought them.

Andrea Guerra: I understand your theory, but they understood that life was better together.

So now Luxottica owns the two top premium sunglass brands in the world, Ray-Ban and Oakley. But Luxottica points out there are other players -

Lesley Stahl: Who's your biggest competitor in the United States?

Andrea Guerra: You could say Walmart.

Also Costco and emerging on-line companies like Warby Parker. But other competitors told us Luxottica has them in a chokehold: if you make glasses, you want to be in their stores; and if you have stores, you want to sell Ray-Bans! So Luxottica can set the prices as high as it wants.

Brett Arends: Luxottica's dominance, it's what's called a price maker which means that essentially it can set prices and other people will follow in its wake.

Which he says is why glasses in general cost so much, even at your local optician's.

Brett Arends: The whole point of a luxury brand is to persuade people to pay $200 for a product that cost $30 to make.

Lesley Stahl: Well let me show you something. Why is it any different than my shoe?

Brett Arends: Well, to some extent there's actually a lot of comparisons. The difference is that the entire shoe industry isn't made by one company. And the same company doesn't also own all the shoe stores.

Lesley Stahl: What don't you own?

Andrea Guerra: A lot of things.

Lesley Stahl: You seem to, really. Why not combine everything under one name?

Lesley Stahl: It's an illusion of choice if you're all owned by the same company.

Andrea Guerra: I think this is totally wrong. The question is, what kind of choice consumer has. It's not a question of how many you own.

Lesley Stahl: How does the consumer benefit from all this? Your prices are still high.

Andrea Guerra: If you go to a shoe company, would you say that their prices are high?

Lesley Stahl: You're trying to tell me it's all worth all that money.

Andrea Guerra: Everything is worth what people are ready to pay.

And you know what? He's right. People are ready to pay. A lot.

Lesley Stahl: I bet they cost a fortune.

Christie: They're not too expensive.

They cost almost $400. With prescription lenses, the price could jump to 600 or more.