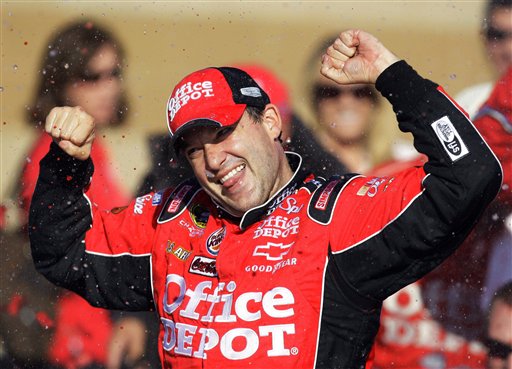 Tony Stewart found himself in danger of letting a title slip away after just two rounds in the Chase for the Sprint Cup championship.

The two-time champion wasn't exactly in a must-win situation Sunday at Kansas Speedway, but a rocky start to the Chase put him in search of some very big finishes before leaders Mark Martin and Jimmie Johnson put the title out of reach.

With a gutsy call on the final pit stop, Stewart ended his slide and sliced into Martin's lead in the standings. His fourth win of the season _ but first in eight races _ moved him up one spot in the standings to fourth, and his deficit was cut from 106 points to 67 behind Martin.

Martin, the pole-sitter, finished seventh and maintained his lead in the standings. He's up 18 points over three-time defending series champion Johnson, who finished ninth after a series of bad pit calls took him out of contention.

But Martin wasn't in a celebratory mood after. There were only three drivers within 106 points of him at the start of the race. As he left Kansas, the field had been doubled to six.

"Look at it however you want," Martin said. "What is there, seven more to go? I don't think we should be getting all hyped up about the tally right now, you know? We've got a lot of racing to go."

The final outcome came down to strategy, and it started to shape as a race that would be decided on fuel mileage. Then Dale Earnhardt Jr., who led 41 laps early before bad breaks ruined his day, brought out the final caution of the race when an engine problem spilled oil on the track.

The leaders went to pit road debating with their crew chiefs whether to take two or four tires on what was likely going to be the final chance to gain track position.

Greg Biffle went to pit road as the leader, while Stewart was second. Biffle and his crew still didn't seem sure of what to do as he pulled into his spot, but Stewart crew chief Darian Grubb was confident two tires was the answer.

"He's like that. He's a little gutsy. That's a good thing," Stewart said. "You don't question him, you just know it's the right thing to do."

Stewart raced off pit road into the lead, with Kasey Kahne and Johnson in pursuit. Both also took two tires.

Biffle, the first driver to take four tires, restarted in fourth and admitted to overruling crew chief Greg Erwin, who only wanted to take two tires.

"I feel bad. Probably the wrong thing to do," said Biffle.

Stewart took off on the restart with 26 laps to go, and all the drivers on four tires quickly sliced through the field. But it was Jeff Gordon who made up the most ground. He was closing in on Stewart but simply ran out laps to catch him and settled for second.

Gordon, who battled a poorly handling car at the start of the race, was thrilled with the final outcome _ until a NASCAR official informed him he'd only gained one spot in the standings to seventh.

Stewart said Gordon was coming fast in his rearview mirror.

"He was getting bigger," Stewart said. "The big thing was not to drive the tires off. We had a little left, but we didn't leave too much out there."

David Reutimann was the only non-Chase driver in the top 11 with an eighth-place finish and was followed by Johnson, Carl Edwards and Kurt Busch.

Only two Chase drivers finished outside the top 11: Ryan Newman, was penalized for speeding off pit road midway through the race, was 22nd and Brian Vickers finished 37th after blowing his motor.