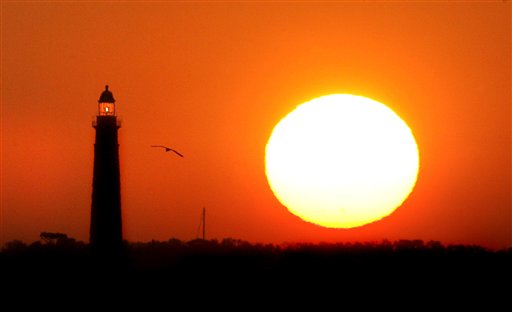 The skirl of a lone bagpipe playing the Scottish lament "Going Home" cut through ghostly fog in a chilling tribute to Payne Stewart before the start of the Tour Championship on Thursday.

With sullen faces and vacant eyes, Stewart's peers on the PGA Tour sat on white folding chairs on the first tee of Champions Golf Club to honor his memory at the tournament where he was to have played.

"He loved to laugh and he was not ashamed to cry. I'm not going to be ashamed of my tears this morning, and neither should you," Tom Lehman said. "When he died on Monday, a big part of us died, too."

Stewart, a winner of 18 tournaments around the world and three major championships, was as traditional in his knickers and tam o'shanter as the game itself. That spirit lived on in a service that showcased golf's roots.

Shrouded by an eerie fog, the bagpiper walked 100 yards toward the first tee playing a song about a Scotsman finally returning to his homeland.

"It was beautiful," Tim Herron said. "The bagpipes drew you into Payne Stewart. When you think of bagpipes, you think of Payne."

Stewart was traveling to Texas to play in the Tour Championship when his plane crashed. Killed with Stewart were his agents, Robert Fraley and Van Ardan; pilots Michael Kling and Stephanie Bellegarrigue; and Bruce Borland, one of Jack Nicklaus' golf course designers.

Not every one was convinced the tour should have proceeded with the tournament, but PGA Tour commissioner Tim Finchem was among those who said it could be a platform to honor Stewart.

"We are still in shock, 72 hours after the terrible plane crash on Monday took from us one of our great champions," Finchem said. "Payne represented the best of golf. He was a man of great faith, a devoted, compassionate and most energetic husband and father, and a man of tremendous generosity."

Players hugged each other as they left the service and headed past the practice green, where Duffy Waldorf was getting ready for the first tee time in the Tour Championship, the $5 million event for the top 30 money-winners.

It was a startling reminder that there was golf to be played.

"That's not the way you plan to start any round of golf," Waldorf said after finishing 27 holes in 2-under-par. Because Stewart's death left only 29 players in the field, Waldorf played alone.

Bob Estes used his putte for the first shot of the tournament, rapping it about 15 feet the length of that historic putt Stewart made in June to win the U.S. Open.

"That's for you, Payne," he said. Estes wound up with a double bogey.

On Thursday night, about 100 players and caddies involved in the PGA event at Jackson, Miss., attended a memorial service for Stewart. Bradley Bryant and Andy Bean spoke during the service.

Several of the players in the tournament, including first-round leader Russ Cochran, had already flown to Orlando, Fla., for Friday's service in Stewart's hometown.

Bryant also passed along a message from Stewart's wife, Tracey, who said her husband would have been proud of the outpouring of support for her and their two children.

"The support we are giving her now is good, but it has to go on," Bryant told his fellow golfers. "Tracey, Aaron and Chelsea, out of our love, out of our respect and out of our friendship we have for Payne, let's be there for his family, not just tomorrow but for the months and years to come."

Lehman considered not playing this week because his mind was not on golf, but then Finchem asked him to offer a prayer at the service Thursday morning. After a few remarks, Lehman prayed for comfort for Stewart's wife and two children, and the families of the other victims.

"I was up all night worrying about completely collapsing and not being able to blubber a word," Lehman said. "I think it's appropriate that we had that service."

The players bowed their heads or stared into space as he spoke.

After a moment of silence, the bagpiper, Steve Agan of Houston, played "Amazing Grace." Then he turned and walk back down the fairway, again playing "Going Home."

During a service at Orlando for Ardan later in the afternoon, golfer Paul Azinger, choking back tears, told several hundred people about Ardan's sense of humor and his devotion to Christianity and his family.

At Jupiter, Fla., Nicklaus and about 1,500 other people attended a service for Borland. The architect had decided at the last minute to fly on the Learjet with Stewart in order to discuss a business project.

"As a fish gets caugh in a net or a bird gets caught in a snare, Bruce Borland was caught in an evil trap Monday," said Tommy Kiedis, associate pastor at the First United Methodist Church in Jupiter. "Life is so unsure."