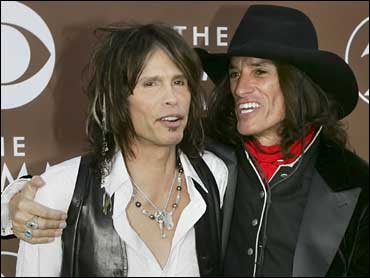 Steven Tyler says he was diagnosed with hepatitis C three years ago after having the illness for a long time without any symptoms.

In an interview that was to air Tuesday on "Access Hollywood," the 58-year-old Aerosmith frontman said the infection was now "nonexistent" in his bloodstream after 11 months of treatment, including the drug interferon.

"I've been pretty quiet about this," Tyler was quoted as saying. "I've had hepatitis C for a long time, asymptomatic. And I talked to my doctor ... and he said now is the time and it's 11 months of chemotherapy. So I went on that and it about killed me."

Hepatitis C is a liver disease spread by contact with the blood of an infected person, according to the Web site for the Centers for Disease Control, which recommends testing for intravenous drug users and transfusion recipients, among others. According to 2004 estimates by the CDC, 3.2 million people have the chronic infection.

"It is nonexistent in my bloodstream as we speak, so it's one of those few miracles in doctoring where it's like a complete cure. It's gone," Tyler said.

Drugs and alcohol nearly destroyed Tyler's music career, but he said in 2004 that he had been clean and sober for nearly two decades and was living proof that addictions can be conquered.

Pamela Anderson announced in 2002 that she had hepatitis C, which she was diagnosed with a year earlier.