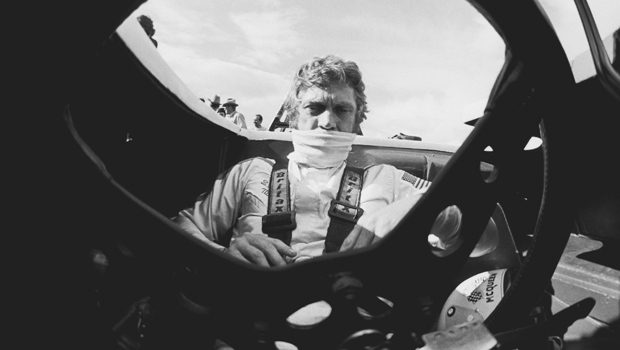 "I don't think there is any race driver that could really tell you why he races. But I think he could probably show you." - Steve McQueen

He was one of Hollywood's hottest properties in the 1960s. The star of such hits as "The Magnificent Seven," "The Great Escape," "Bullitt" and "The Thomas Crown Affair," Steve McQueen's graceful machismo and laconic air earned him the sobriquet "The King of Cool." He favored playing antiheroes -- and, off-screen, racing cars.

His desire to produce the "ultimate racing movie" -- a feature-length film depicting the 24-hour endurance race in Le Mans, France -- would prove to be professionally torturous for McQueen, who was at a pivotal point in his career. Disillusioned by the film business, he sought to make his own films through his production company, Solar. For "Le Mans" he brought on veteran director John Sturges.

A foot injury kept McQueen (who'd just finished second at the 12 Hours of Sebring race) from competing in the 1970 Le Mans, which his film crew covered documentary-style (camera cars kept pace with the true competitors). After the checkered flag fell, the film crew stayed in Le Mans to shoot the film proper, putting cars through their paces for six months. A mythical-sounding million feet of film was purportedly shot.

It might have helped had there been a script. Nervous studio executives pressured McQueen for a story, any story. The actor and his favored screenwriter, Alan Trustman, parted ways. After six weeks, Sturges himself quit in frustration. An accident cost driver David Piper his leg. And through it all, McQueen pushed for authenticity before the cameras while also facing crises in his personal life.

His obsessions were further fueled by paranoia and serendipity (just months before filming, a rendezvous with a blonde has kept him from attending the same Hollywood party where Sharon Tate and four others were murdered; McQueen later discovered his name was on Charles Manson's list of celebrities to kill.) A womanizer, McQueen saw his strained relationship with his wife shatter when she admitted to infidelity.

For all its production headaches, the final film wasn't bad. But it wasn't what movie audiences or studios were looking for in 1971, and so "Le Mans" had to settle for becoming a cult favorite of auto enthusiasts -- revered for its realism and stubborn refusal to adhere to standard Hollywood narrative conventions, like a plot.

The bitter experience would reshape McQueen. He never raced again. His marriage ended, and he became more and more reclusive. Though wounded by the film's box office failure, he starred in several major hits in the '70s ("Papillon," "The Getaway," "The Towering Inferno"). His last film was released just months before his death in 1980.

For the new British documentary "Steve McQueen: The Man & Le Mans," filmmakers Gabriel Clarke and John McKenna have unearthed several Holy Grails: long-missing on-the-set featurettes and behind-the-scenes footage; dozens of boxes of rushes (believed to have been destroyed but located beneath a London soundstage); and an audio recording of McQueen shortly before he died, speaking while he pursued treatment for his lung cancer.

The film also features new interviews with McQueen's son, Chad, and ex-wife, Neile Adams; drivers Derek Bell, Jonathan Williams, and Piper; key crew members; and Swedish actress Louise Edlind, who almost died while a passenger in McQueen's car when he crashed in a late-night jaunt through the French countryside.

Clarke and McKenna have produced a mesmerizing and unguarded testament to McQueen's vision. Neile McQueen said her husband "wanted to leave his scratch-marks on the history of film-making." With "Le Mans," skid marks may have been a more appropriate analogy, but McQueen's tenacity is as palpable as the pungent smell of motor oil and the incessant roar of Porsche 917 engines.