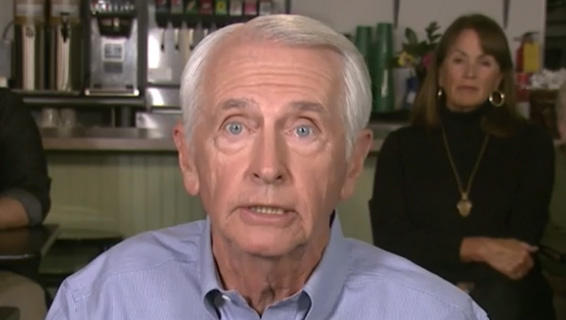 He addressed President Trump directly in his address at one point, reminding him, “Mr. President, as a candidate, you promised to be a champion for people struggling to make ends meet … and I hope you live up to that promise.”

Beshear went on to note, though, that “one of your first executive orders makes it harder for those families to afford a mortgage.” On Mr. Trump’s first day in office, he signed an order that rolled back a discount on the fees for a federal mortgage program that helps middle-class homebuyers.

Beshear also criticized Trump’s verbal assaults on “the loyalty and credibility” of intelligence agencies, federal courts, the press and others. By such attacks, Beshear said in excerpts of his prepared remarks, Trump is “eroding our democracy. And that’s reckless.”

Beshear’s words and tone seemed a direct Democratic attempt to recapture the loyalties of some working-class voters who helped power Trump’s election upset last November. His very selection by Democratic party chiefs to deliver their response seemed aimed at the same goal, since the 72-year-old is best known for expanding health care coverage in his deep red state under former President Barack Obama’s health care law.

Trump used his first address to Congress as president to urge lawmakers to revamp the nation’s health care system, embracing tax credits, health savings accounts and other elements of a plan being pushed by House GOP leaders. While erasing Obama’s 2010 overhaul and replacing it is a long-time Republican goal, conservatives have rebelled against the developing GOP package and other internal disputes still simmer, though leaders say they will push ahead with legislation in March.

“You and your Republican allies in Congress seem determined to rip affordable health insurance away from millions of Americans who most need it,” Beshear said.

“This isn’t a game, it’s life and death for people,” Beshear said. He said those relying on Obama’s statute for coverage “aren’t aliens from a distant planet. They’re our friends and neighbors.”

The backdrop for Trump’s speech was an initial five weeks in office that have seen persistent questions about his campaign’s relationship with Russia, a mishandled order barring refugees and the firing of his first national security adviser, Michael Flynn.

There have been massive demonstrations against Trump’s policies in cities around the country, and GOP lawmakers have been greeted at town hall meetings by activists angry at his attempt to erase Obama’s health care statute. Trump’s popularity in public opinion polls has set record lows for new presidents.

Emboldened by the energy of their party’s voters, Democratic lawmakers were flashing their own brands of rebelliousness.

Rep. Maxine Waters, D-Calif., was boycotting Trump’s speech, and Rep. Eliot Engel, D-N.Y., was ending his near three-decade streak of snagging an aisle seat to clasp the president’s hand as he enters the House chamber for his speech. The visitors’ galleries were stuffed with immigrants and recipients of health benefits under Obama’s law invited by congressional Democrats, and numerous female Democratic lawmakers were wearing white as a symbol of support for women’s suffrage.

Beshear said that while Trump campaigned as “a champion for people struggling to make ends meet,” he’s taken executive action as president to roll back consumer protections against giant financial institutions and has stocked his Cabinet with wealthy financial executives.

“That’s not being our champion. That’s being Wall Street’s champion,” Beshear said.

Giving the Democrats’ response in Spanish was Astrid Silva, a so-called Dreamer brought to the U.S. illegally as a 4-year-old.

In her prepared comments, Silva, now 28, said Trump is “taking us back to some of the darkest times in our history.”

She said Trump is “criminalizing anyone who is different, pitting us against each other, and sending the wrong message to the rest of the world, helping to breed anger and hate from terrorist groups to our country.”