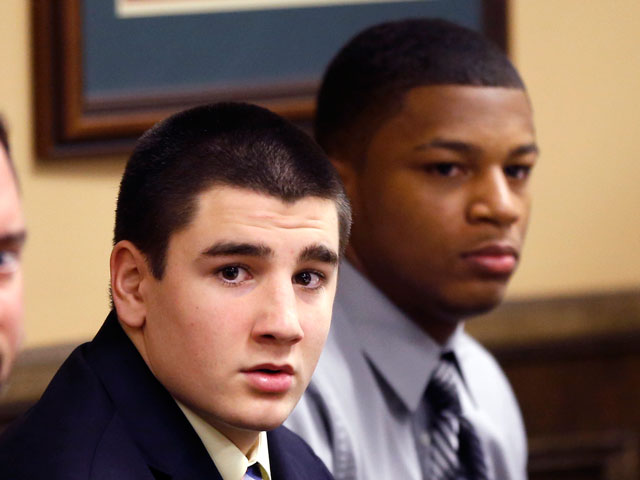 (CBS/AP) -Two teenage girls testified that a 16-year-old girl was drunk and having trouble walking on the night she was allegedly raped by two Ohio high school football players.

Ma'Lik Richmond, 16, and Trent Mays, 17, are charged as juveniles with sexually assaulting a 16-year-old girl while she was intoxicated during a night of partying last August. They have both pleaded not guilty.

At trial Wednesday, one 17-year-old friend of the alleged victim told the court that she'd never seen her so drunk.

According to the Cleveland Plain Dealer, the witness said that the girls filled cups up with Stoli Vanilla vodka to drink at the party and that the alleged victim "went downhill fast." She testified that the next morning, her friend was confused.

She started crying and said 'I don't remember anything,'" the witness said, according to the paper.
The Plain Dealer reports that another 17-year-old, who attended Steubenville High School with the defendants, testified the alleged victim was drunk and stumbling when she walked. When asked about the photograph of the alleged victim being carried by two males, the paper reports that the witness testified the girl was conscious while this was happening and that one of the boys stepped on her hair.

The same witness also reportedly testified that she tried to get the girl to go with her to another party but that she refused.

Mays' attorney, Brian Duncan, told the judge that his client "did not rape the young lady in question."

More witnesses, including the alleged victim, are expected to testify in the next two days. The case will be decided by Judge Thomas Lipps, not a jury. If found guilty of rape, Mays and Richmond face incarceration until the age of 21, and may be required to register as sex offenders.