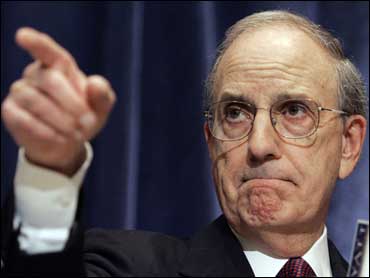 The long-awaited report slammed home what many had long been suspected: illegal drugs were part of the lineup of every team in Major League Baseball beginning in the mid 1990s.

"Those who have illegally used these substances range from players whose major league careers were brief to potential members of the Baseball Hall of Fame," former Senate Majority Leader George Mitchell wrote in his much-anticipated report on performance-enhancing drugs.

"They include both pitchers and position players, and their backgrounds are as diverse as those of all major league players."

Seven MVPs, two Cy Young Award winners and 31 All-Stars - one for every position. In all, the 409-page report identified 85 names to differing degrees, putting question marks if not asterisks in the record book and threatening the integrity of the game itself.

"I didn't learn everything there is to learn about performance enhancing drugs in baseball. There are many other suppliers, many other dealers, no doubt many other users," Mitchell said Friday on CBS News' The Early Show.

Page after page, Roger Clemens' name was all over the Mitchell Report.

But they didn't get the worst of it Thursday. That infamy belonged to Clemens, the greatest pitcher of his era.

"If there are problems, I wanted them revealed," commissioner Bud Selig said. "His report is a call to action, and I will act."

While he vehemently denied it through his lawyer, Clemens was the symbol.

Considered a lock for the Hall of Fame earlier this week, Clemens' path to Cooperstown was thrown in doubt after he was singled out on nearly nine pages.

Seven-time Cy Young Award winner, eighth on the career list with 354 victories, an MVP and All-Star himself, Clemens suddenly had more to worry about than simply whether to play next season.

"It is very unfair to include Roger's name in this report," said Hardin. "He is left with no meaningful way to combat what he strongly contends are totally false allegations. He has not been charged with anything, he will not be charged with anything and yet he is being tried in the court of public opinion with no recourse. That is totally wrong."

Much of the information about Clemens came from former New York Yankees major league strength and conditioning coach Brian McNamee.

"I have a problem with relying in this situation on what somebody says now all of a sudden while being threatened by criminal prosecution," Hardin told reporters.

According to the report, McNamee also told investigators that "during the middle of the 2000 season, Clemens made it clear that he was ready to use steroids again. During the latter part of the regular season, McNamee injected Clemens in the buttocks four to six times with testosterone from a bottle labeled either Sustanon 250 or Deca-Durabolin."

The report was unlikely to trigger a wave of discipline. While a few players, such as Bonds, are subjects of ongoing legal proceedings, many of the instances cited by Mitchell were before drug testing began in 2003.

Mitchell said punishment was inappropriate in all but the most egregious cases, and Selig said decisions on any action would come "swiftly" on a case-by-case basis.

"The most alarming thing that I learned was that hundreds of thousands of American teenagers are using steroids. That's not just involved with baseball, youngsters look up to all great athletes, and they emulate them," Mitchell told Early Show co-anchor Harry Smith.

Mitchell said the problems didn't develop overnight and there was plenty of blame to go around.

"Everyone involved in baseball over the past two decades - commissioners, club officials, the players' association and players - shares to some extent the responsibility for the Steroids Era," Mitchell said. "There was a collective failure to recognize the problem as it emerged and to deal with it early on."

Baseball superstar Alex Rodriguez says if there is truth in the Mitchell report, it will be a "huge black eye" for the game of baseball. Katie Couric speaks with Rodriguez on 60 Minutes this Sunday, at 7 p.m. ET/PT.

Mitchell recommended that the drug-testing program be made independent, that a list of the substances players test positive for be issued periodically and that the timing of testing be more unpredictable.

"The illegal use of performance-enhancing substances poses a serious threat to the integrity of the game," the report said. "Widespread use by players of such substances unfairly disadvantages the honest athletes who refuse to use them and raises questions about the validity of baseball records."

Canseco, whose book "Juiced" was cited throughout, was mentioned the most often - 105 times. Bonds, already under indictment on charges of lying to a federal grand jury about steroids, was next at 103.

A total of 20 Yankees, past and present, were identified. Players were linked to doping in various ways - some were identified as users, some as buyers and some by media reports and other investigations.

"Other investigations will no doubt turn up more names and fill in more details, but that is unlikely to significantly alter the description of baseball's `steroids era' as set forth in this report."

Mitchell is a director of the Boston Red Sox, and some questioned whether that created a conflict, especially because none of their prime players were in the report.

"Judge me by my work," Mitchell said. "You will not find any evidence of bias, special treatment, for the Red Sox or anyone else. That had no effect on this investigation or this report, none whatsoever."

Giambi, under threat of discipline from Selig, and Frank Thomas were the only current players known to have cooperated with the Mitchell investigation.

"The players' union was largely uncooperative for reasons that I thought were largely understandable," Mitchell said.

Union head Donald Fehr made "no apologies" for the way they represented players.

"Many players are named. Their reputations have been adversely affected, probably forever," he said. "Even if it turns out down the road that they should not have been."

Certainly a lot of people read the names. The report was downloaded 1.8 million times off MLB.com in the first three hours after it was posted.

About two hours after the report was released, two congressmen at the forefront of Capitol Hill's involvement in the steroids issue asked Mitchell, Selig and Fehr to testify at a House committee hearing Tuesday.

California Democrat Henry Waxman and Virginia Republican Tom Davis - the leaders of the panel that held the March 17, 2005, hearing at which Mark McGwire, Sammy Sosa and Palmeiro testified - want to know "whether the Mitchell Report's recommendations will be adopted and whether additional measures are needed," they said.

Also, a Congressional subcommittee will hold a hearing on Jan. 23 relating to steroid use in professional sports.