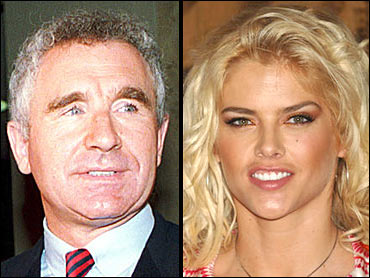 Actress Zsa Zsa Gabor once said husbands are like fires — they go out when unattended.

Her flamboyant eighth husband, Prince Frederic von Anhalt, says he did more than just go out. He claims he carried on a decade-long affair with Anna Nicole Smith and may be the father of her baby daughter.

His claim has largely been met with disbelief, but has boosted curiosity about the man who is rumored to have paid a bankrupt princess for his title.

He denies those reports, but acknowledges making millions of dollars by turning around and selling his title to at least 10 people.

Von Anhalt is also known for making outrageous statements about the advantages of being rich, laying claim to a German castle and suing Viagra for leaving him unable to have sex unless he takes the drug. He later dropped the case.

Even his age has been questioned. He says he is 59 but the German press puts him in his mid-70s.

Since making his claim the day after Smith died, von Anhalt has appeared on a number of news shows. Speaking in a thick German accent and wearing a ring that resembles a crown, he sometimes played it coy and other times gushed with details.

Bonnie Stern, the sister of Howard K. Stern, who is listed as the father of Smith's baby on her birth certificate, called von Anhalt's assertions "nauseating."

"She didn't even know him," Bonnie Stern said.

Ronald Jason Palmieri, longtime attorney for Gabor and von Anhalt, said, "the odds of him ending up to be the parent of this child are remote to none."

Born Hans Robert Lichtenberg, von Anhalt said he grew up in a poor German family and was abused by his policeman father and pushed to become a military officer. Over the years he worked as a bank clerk, screenwriter, sauna manager and soccer player.

"I had a very hard childhood," he said, recalling how he sought escape in movies and newspaper articles about Hollywood celebrities, including Gabor, then a sex symbol.

To hear von Anhalt tell it, he gained his royal title through an act of kindness in the late 1950s, when he became good friends with the son of Princess Marie Auguste of Anhalt. When her son died in a car accident, von Anhalt comforted the princess.

His own parents dead, he said she adopted him in 1980 and gave him the title of Prince Frederic von Anhalt of Munich, the Duke of Saxony — or Frederic Prinz von Anhalt, as he is also known.

The less romantic version that has circulated in the British press is that von Anhalt paid the princess for the title.

Asked about selling it to others, he says, "If someone offers you $2 million, you do it."

He said Gabor was as intrigued by the promise of gaining a title as he was about being tied to Hollywood royalty. The two were married in 1987. She now goes by Princess von Anhalt and Duchess of Saxony.

"We didn't marry for love," he said. "It was a friendship, but when you're with someone over a certain time you fall in love."

After Gabor was convicted of battery for slapping a Beverly Hills police officer in 1989, von Anhalt said the rich were entitled to better treatment.

"They bring the money into Beverly Hills," he said at the time.

In the 1990s, title and celebrity in tow, von Anhalt tried to lay claim to the von Anhalt family castle in Germany. He enticed the town mayor with a personal note from former U.S. President Ronald Reagan and his wife Nancy and sent jewels later found to be glass and aluminum. He says it was Chanel costume jewelry.

Von Anhalt said he and Smith met in the 1990s, when Smith was still married to elderly oil tycoon J. Howard Marshall II.

Asked how he managed the alleged affair, he claimed they met in hotels in Los Angeles, San Francisco and New York, even though he takes care of his 90-year-old wife. She uses a wheelchair after being partially paralyzed in a car accident in 2005.

"You can have an affair in 10 minutes," von Anhalt said.

Then he contradicted himself.

"I never talk about my private life anyway," he said. "They will never know because I don't talk."