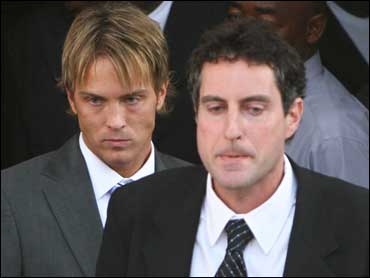 Howard K. Stern says claims in a new book that he and Anna Nicole Smith's ex-boyfriend had a videotaped sexual encounter before her death are absurd and could psychologically damage Smith's infant daughter.

"It's ridiculous. I mean it's absolutely absurd," Stern told etonline.com.

The Web site said it obtained the comments from Stern during a birthday party for Smith's 1-year-old daughter, Dannielynn, on Saturday in Louisville, Ky.

"Dannielynn is gonna read this garbage and it's almost like she's gonna have to get counseling from the age of 3," Stern said, according to a press statement from etonline.com. The interview was scheduled to air Thursday on "Entertainment Tonight."

Birkhead and an attorney for Stern previously indicated they would sue over claims made in Rita Cosby's book "Blonde Ambition: The Untold Story Behind Anna Nicole Smith's Death." Birkhead also has denied any encounter occurred.

Smith, a former Playboy Playmate, gave birth to Dannielynn a few days before the death of her son, Daniel, 20, in the Bahamas. Smith died of an accidental drug overdose in Florida in February at the age of 39.