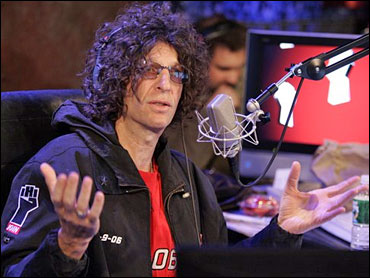 Shock jock Howard Stern regained control of the master tapes from the last 20 years of his radio program in a settlement of the contentious lawsuit brought by his former bosses at CBS Radio.

Stern's new employer, Sirius Satellite Radio Inc., agreed to pay $2 million to CBS Radio in return for the rights to the classic recordings, according to a statement released by both sides.

"As part of the settlement, CBS Radio will receive payments relating to the conveyance of its rights in the recordings of 'The Howard Stern Show,'" the statement read. "Sirius, for its part, will make a total payment of $2 million related to this conveyance."

The remaining details of the settlement remained confidential, according to the statement.

CBS spokesman Dana McClintock declined to make any further comment, and Stern's agent, Don Buchwald, did not immediately return a call about the settlement.

CBS Radio sued Stern in February, the latest salvo in an escalating battle between the corporation and its former star employee. The company claimed Stern had violated his contract by improperly using his airtime on CBS stations to promote his January 2006 move to Sirius.

Stern "misappropriated millions of dollars' worth of CBS Radio air time for his own financial benefit," the 43-page lawsuit charged.

Stern also discussed his plans with Sirius without disclosing them to CBS, as required by his contract, the lawsuit said.

"I believe you are working for one of the biggest jerks on the planet," Stern told Letterman, whose show airs on CBS. "Les Moonves is a bully."

Stern, 50, was the anchor of CBS's radio division with his nationally syndicated morning show until he bolted for satellite radio in January under a five-year, $500 million contract. Lawyers on both sides confirmed the settlement on Wednesday, but no details emerged until the statement was released two days later.

During the last months of his terrestrial radio show, Stern battled constantly with his bosses and was suspended for a day over his alleged promotion of Sirius.