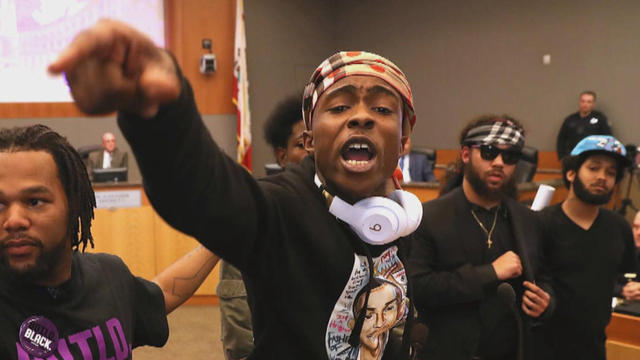 SACRAMENTO -- About 50 protesters took over the intersection near the Sacramento district attorney's office as part of a protest organized by the local Black Lives Matter chapter to urge the district attorney to file charges against the officers who shot and killed Stephon Clark. A wake for Clark was held Wednesday and a funeral was scheduled for Thursday, a little over a week after he was shot and killed by Sacramento police.

They disrupted midtown rush hour traffic as they marched through the streets. Latavia Ross, pushing her 2-year-old son Jayceon Hurts in a stroller, said she attended the protest because she thinks it's good for the community to come together to end to gun violence.

Stephon Clark's brother, Stevante, approached reporters outside the Bayside of South Sacramento church and yelled and screamed for them to leave and saying they don't care about his family. Some attendees wore black shirts calling for justice, while one woman held up a clenched fist as she exited the church.

The Associated Press reports that Stevante was picked up and carried into the church by a man -- but then reappeared several minutes later and was quickly carried away as he moved to approach the gaggle of reporters again.

Saramento Mayor Darrell Steinberg said a community meeting that had been scheduled to begin at the same time as Clark's wake had been canceled, CBS Sacramento reports. Steinberg said he made the decision to postpone the meeting out of respect for the family.

The Rev. Al Sharpton plans to deliver the eulogy at Clark's funeral on Thursday.

Tensions remain high in California's capital city following the March 18 shooting. Two police officers who were responding to a report of someone breaking car windows fatally shot him in his grandparents' backyard. Police say they believe Clark was the suspect and he ran when a police helicopter responded, then did not obey officers' orders.

Police say they thought Clark was holding a gun when he moved toward them, but he was found only with a cellphone.

Many mourners weren't buying that narrative.

"You always feel threatened - you're a law enforcement officer, it comes with your job title," said Rahim Wasi. "That doesn't give you a right to go running around like Clint Eastwood in a movie."

Some of Clark's relatives were more conciliatory.

"We're not mad at all the law enforcement. We're not trying to start a riot," said Shernita Crosby, Stephon Clark's aunt. "What we want the world to know is that we got to stop this because black lives matter."

He was outgoing, funny, loving, a good-looking man who liked to dress sharp and the doting father of two young sons.

"He made some mistakes in his life, but he was genuinely a good person," she said.

Protests have been held almost daily and marchers have twice blocked fans from entering the NBA arena downtown for Sacramento Kings games. The police, the Kings and Steinberg's office met Wednesday to discuss security ahead of Thursday night's game. Sgt. Vince Chandler said officers would be ready to respond in protective gear, according to The Sacramento Bee.

Tuesday's council meeting ended early due to safety concerns. Clark's brother took over the meeting by chanting Stephon's name, then jumping onto the mayor's council desk.

Black Lives Matter had been planning another protest in the wake of the shooting. Activists are continuing to put pressure on the district attorney's office to prosecute the two officers who fired at Clark.

A question about Stephon Clark was asked during Wednesday's White House press briefing where Sarah Huckabee Sanders said the incident was "terrible incident." The reporter asked if President Trump would weigh in on the shooting and Sanders mentioned it's "something we feel should be left up to local authorities."

Sanders added: "The president is very supportive of law enforcement. But at the same time, in these specific cases and these specific instances, those will be left up to local authorities to make that determination and not something for the federal government to weigh into."

In an interview with CBSN on Wednesday, Steinberg said, "I do not believe our police force is racist in any way" and "I don't think that's intended but I do think that implied racism is an undeniable factor in the way these sorts of tragedies play out -- not just in Sacramento but throughout the country."

Steinberg expanded on this, saying that not just in law enforcement but "all of us" have "preconceived attitudes and stereotypes" that cause people to act differently "depending on the color of one's skin."