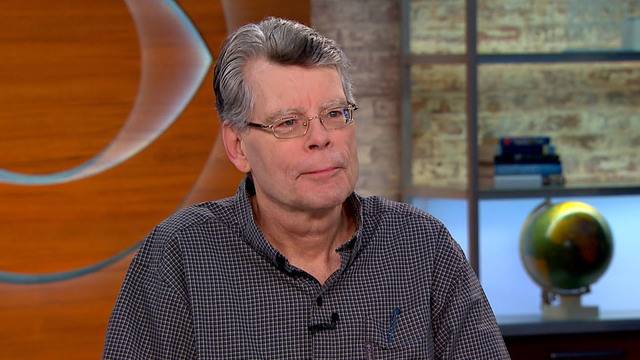 You might think Stephen King, mastermind behind books like "Carrie," "The Shining" and "It," would frankly be a little eerie.

While he admits there's certainly "somebody fairly creepy inside" of him, he was nothing but normal when he stopped by "CBS This Morning" to talk about his career, his fears and his new movie, "A Good Marriage."

The film, which opens Oct. 3, was inspired by the infamous BTK killer, Dennis Rader.

The film's protagonist, Darcy, played by Joan Allen, discovers her husband, Bob, played by Anthony LaPaglia, isn't the man she thought he married.

"She never had a clue of what he was doing and this secret life that he had," King said. "And so I started to think, I wonder how many of us are sleeping with strangers and what we really know about the people that we think we're close to."

This chilling story led him to write his first screenplay since "Pet Sematary," which was released 25 years ago.

But despite the sinister nature behind his works, King claims he's harmless.

"I sometimes say to people, there are people who have complexes and fantasies and they go to a psychiatrist and they pay $50, $70 an hour," King said. "I do the same thing, and people pay me."

He does admit, though, sometimes his dark reputation precedes him.

"I was in the grocery store down in Florida, and I came around the corner of the aisle, and there was this elderly woman who was pushing her cart," he said. "And she looked at me and she said, 'I know who you are. You write those scary things, and that may be OK for some people. I respect you, but I don't read things like that.' And I said, 'Well, ma'am, I wrote "The Shawshank Redemption" and "Stand by Me,"' and she said, 'No, you didn't.'"

And the woman just walked right past him.

"So you get a reputation," he said.

It's a reputation that often has fans wondering what terrifies the horror fiction author.

Although he said he doesn't like spiders or bats, at 67, King's real-world fears aren't that fantastical.

"Guys like me, guys who are actors, writers, sculptors, painters, we live by our wits - comedians," he said. "I think that what really scares me is, you know, starting to strip my gears a little bit - Alzheimer's, dementia, things like that. I hate the idea of that."

Just like many his age, he's afraid of losing control.

One day, his very fear nearly came true when he was hit by a car, and he said he "almost" died.

"I got smashed up pretty well, and I don't think you ever completely recover from that, but the body's amazing, and I'm mostly OK," he said.

But his wife got the last laugh - she bought the very vehicle that hit him. Despite rumors though, King said he didn't beat it up with a hammer.

"The reason she bought it was she was afraid somebody would put it for sale on eBay, so she had it put in a car crusher," he said laughing as he remembered the incident.

One of the most impressive stories in King's career may just be how he got his start - or almost didn't.

He was a high-school teacher when he wrote "Carrie" in 1974. But after four pages, he gave up.

But of all the interesting facts about King, one still might be the most unbelievable.

"I'm sort of the Halloween Grinch," King said. "It's just like, you get this scary reputation, and you're sort of like the Santa Claus of Halloween."

And when King got tired of being the poster boy for the spookiest day of the year: "Finally my wife said, 'No, no more. Let's just turn off the lights and cower in the basement.'"

Yet, with more than 350 million books sold, any reputation for King may be a good reputation.