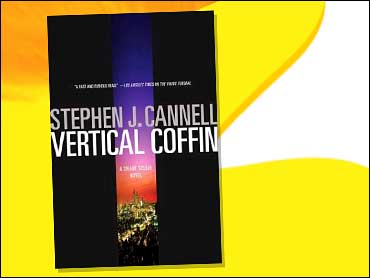 Best-selling novelist Stephen J. Cannell has ten books to his credit and a screenwriter's ear for dialogue.

It's no wonder, since he created some of the most popular television shows of the past few decades: "The Rockford Files," "The A-Team," "21 Jump Street," "Wiseguy" and the "Commish."

In the book, it's up to Sgt. Scully to figure out why law enforcement officers are being murdered.

Cannell visited The Saturday Early Show to discuss his newest novel and his impressive career.

Stephen. J. Cannell is an Emmy-winning writer/producer and chairman of Cannell Studios. He has created or contributed to more than 40 shows during a career that spans almost four decades. Interestingly, he overcame severe dyslexia to become one of television's most prolific writers. He even flunked a few grades in school before his condition was diagnosed. Now he is a spokesperson on the subject of dyslexia. He also offers an online course on screenwriting on his Web site, www.cannell.com.
He has said that for years, he was "fearful" of writing a novel. But once he made it a priority in his life, he plugged away at it until, at the end of a year, he had his first novel. His books include "Runaway Heart," "The Devil's Workshop," "Riding the Snake," "King Con," "Final Victim," and "The Plan."

He also has a number of TV and film projects lined up. The DVD release of his popular TV show "Wiseguy" hit the stores in August 2003 and has a cult following, of sorts. He has some other projects in development: 'The A-Team" feature film for Fox; a "21 Jump Street" feature film for Paramount; and "The Greatest American Hero," a feature film for Disney.

Cannell grew up in California and now lives in LA with his wife of more than 39 years. He says their marriage has lasted this long because his wife is his best friend, and they spend a lot of time talking to each other. He says that their friendship, "transcends a lot of stuff and gives both of us strength." They have three children.

Cannell believes that what makes for a great novel is, "... a good story with realistic characters and vibrant relationships. I may spend more time deciding what I'm going to write as a novel than I ever did trying to come up with a TV series. With a novel, I may spend two or three months researching a specific topic, only to chuck it all. I don't want to get stuck writing about something I don't love."

Here's a synopsis of "Vertical Coffin," which is based in part on a real incident that took place in 2001 in Santa Clarita, California:

In law enforcement, it's common knowledge that police are most at risk from gunfire while passing through a doorway, the so-called "vertical coffin." That's where members of two elite law enforcement agencies are being murdered, one after another, in Cannell's new novel.

A Los Angeles Sheriff's Deputy is gunned down while serving a routine search warrant. The result is a violent stand-off between law enforcement and the gunman, who barricades himself inside his house. This rapidly escalates into a Waco-like inferno.

Then the finger-pointing begins: The sheriff's deputies blame the Bureau of Alcohol, Tobacco, and Firearms (ATF) and accuse the agency of failing to warn them that the suspect, Vincent Smiley, was stockpiling illegal weapons in his garage. The ATF denies any wrongdoing, fueling tensions between the two SWAT units and even threatening to escalate into violence between them.

In an effort to head off an all-out war between the two agencies, the mayor orders the LAPD to investigate. Detective Shane Scully is assigned to the case by his commanding officer, who happens to be his wife, Alexa.

What at first looked like a "suicide-by-cop" trap set by a gunman bent on his own demise has enough loose ends to make Scully wonder: Why didn't law enforcement bring in a negotiator before they started pumping bullets into the gunman's house? How did a federal SWAT team know to go to the house, even though their radio wasn't programmed to the Sheriff Department's frequency? If Smiley wanted to die at the hands of police, why was he wearing a gas mask and Kevlar body armor?

Working against a deadline to get to the bottom of these murders, Scully must team up with Sgt Josephine Brickhouse, an investigator from the department's Internal Affairs Division. But her tough demeanor doesn't make his job any easier. Scully has to figure out a solution before the two SWAT teams wipe each other out and perhaps let the real killer go free.

Read an excerpt from "Vertical Coffin":

It was mid-September, hot and dry, the kind of hot that makes you think of frosty cans of Coors and long swims in the ocean.

I was standing in a small, burned-out shack ten miles east of Palmdale in the high desert. There wasn't much left, a rock chimney and some blackened footings. My shoes were already covered with soot from kicking at scorched rocks and the remnants of charred furniture. It was ten on a Tuesday morning and the lizards had already abandoned their flat rocks to slither into the shady crevices between granite outcroppings.

This had been a Palmdale P.D. crime scene a month ago. Now it was mine. I'd driven out here in a primered Ford Bronco along with Sonny Lopez. The truck was his privately owned vehicle, known in police circles as a POV. Sonny was a sheriff's deputy working L.A. Impact, a multi-jurisdictional law-enforcement task force located in Los Angeles County, in Lancaster. The TF was a bad pork stew made up of LAPD and state cops, LASD, and a smattering of feds from the FBI, Customs, and ATF. All of them pretending to be a kick-ass unit, while at the same time trying to get past their deep jurisdictional prejudices.

Sonny Lopez was in his mid-thirties, tall, and movie-star handsome. He was working meth labs for L.A. Impact. This one had exploded and burned to the ground. At first it was thought to be a gas leak, but the county fire teams had learned to call the cops if they saw chemistry glassware in the ashes. When they were raking the debris cold, too many test tubes came up in the furrows.

Since crystal kitchens tended to explode more frequently than Palestinian suicide bombers, the Palmdale P.D. did tests on the soil and found high quantities of methamphetamine. In fact, the dirt was so laced with amp, the site started to get nightly visits from local crankheads. They hauled away the soil, taking it home to mine it for meth. A dirt lab is what we called it. L.A. Impact did a lot of meth investigations, so they were called in.

I came from a far more depressing direction.

Two kids had starved to death in a house in Fullerton; fourteen-month-old Cindy and her four-month-old brother, Ben. Their mother, Paula Beck, was a crystal addict with half a dozen meth-cooking busts in her package. Paula was currently in the Sybil Brand Institute facing two involuntary manslaughter charges. The D.A. wanted to boot it up to murder two and had asked Special Crimes at LAPD to look for extenuating circumstances. Since my partner, Zack Farrell, was on a temporary leave of absence to be with his ill mother in Florida, and since it was mostly a background check, which required no partner, I got to work on that grizzly little double homicide. The D.A. thought if he could file the bigger charge against Paula he could get her to roll on her ex-boyfriend, Paco Martinez, a high-profile drug dealer.