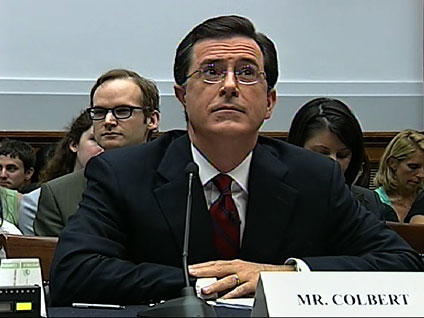 Comedy Central's Stephen Colbert testified before a House Judiciary subcommittee hearing in character this morning, speaking on the topic of working in America's fields.

Colbert, testifying next to the president of the United Farm Workers (UFW), discussed his "vast experience spending one day as a migrant farm worker," adding that he was "happy to use [his] celebrity to draw attention to this important, complicated issue." (Watch at left.)

"I certainly hope that my star power can bump this hearing all the way up to C-Span 1," Colbert joked.

The comedian was one of 16 people to participate in the UFW "Take Our Jobs" campaign, which was launched this summer as a challenge to U.S. citizens to replace immigrants in farm work. (He turned the experience into a segment for his show, Comedy Central's "Colbert Report," where he stars as a mock-conservative news anchor whose mission is to get to the "truthiness" of the news.)

Colbert said of the experience, "I have to say, and I do mean this sincerely, please don't make me do this again. It is really, really hard."

Colbert appeared amid a swarm of photographers, listened to behavioral directives from the committee's Chairwoman Zoe Longfren (who warned the audience that "if necessary, the Capitol police are here"), and brought the committee levels of media coverage that the committee hadn't seen "maybe since impeachment," as Longfren commented. He delivered remarks that maintained his mocking public persona while shading into serious arguments for the rights of migrant workers.

"I don't want a tomato picked by a Mexican. I want it picked by an American. And sliced by a Guatemalan, and served by a Venezuelan, in a spa, where a Chilean gives me a Brazilian," Colbert said at one point.

He added: "As you heard this morning, America's farms are presently far too dependent on immigrant labor to pick our fruits and vegetables...The obvious answer is for all of us to stop eating fruits and vegetables. And if you look at the recent obesity statistics, you'll see that many Americans have already started." He went on to ask that a video of his colonoscopy be submitted to the Congressional record.

Colbert, whose statement bore almost no resemblance to the "prepared remarks" released beforehand, went on to talk seriously about the plight of laborers in America, saying that "migrant workers suffer and have no rights."

"I like talking about people who don't have any power," Colbert said, appearing to break character, when asked why he decided to take on the issue. "It seems like some of the least powerful people in the United States are migrant workers who come and do our work, but don't have any rights as a result. And yet we still invite them to come here and at the same time ask them to leave. And that's an interesting contradiction to me."

But while most of the Congress members present seemed pleased with Colbert's appearance before the committee - which potentially brought more national attention to the cause than it might have otherwise received - not everyone was laughing along with his jokes. "I think [inviting Colbert to testify] was a mistake," Democratic Rep. Steve Cohen told The Hill. "Picking vegetables for 10 hours doesn't make you an expert in anything, except how unpleasant it is to pick vegetables for 10 hours. I think using an actor in character to give testimony makes a mockery of the committee process."

Rep. John Conyers asked Colbert during the hearing to recuse himself from the committee and submit his statement instead, saying that "you run your show, we run the committee," though he later retracted the request. (Watch below.)

Steve King, the conservative ranking Republican on the House Judiciary subcommittee on immigration, also took issue with Colbert's presence. "Maybe amnesty supporters should spend less time watching Comedy Central and more time considering all the real jobs that are out there that require hard labor and don't involve sitting behind a desk," he said during the hearing. "If they did, they would realize that every day American workers perform the dirtiest, most difficult, most dangerous jobs that can be thrown at them."

Rep. Jason Chaffetz (R-UT), who sits on the immigration subcommittee, called the ordeal a "joke" on CBSNews.com's "Washington Unplugged" today.

"He's the best fake newscaster there is so if they're going to have a fake hearing, I guess he's the guy to do it," Chaffetz said. "It's just unfortunate I've sponsored close to a dozen bills that deal seriously with immigration and none of them have been brought up for discussion. None."

Watch the full episode of "Washington Unplugged" below: