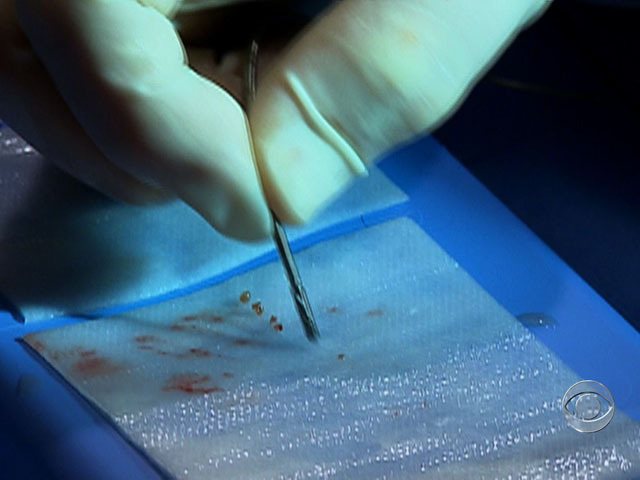 The study looked at patients with damaged hearts from myocardial infarctions, or heart attacks, and found stem cells reduced the amount of scarring and helped hearts regrow healthy muscle.

"This discovery challenges the conventional wisdom that, once established, scar is permanent and that, once lost, healthy heart muscle cannot be restored," study co-author Dr. Eduardo Marban, director of the Cedars-Sinai Heart Institute and inventor of the techniques used in the procedure, said in a hospital written statement.

For the study, researchers tested 25 patients, an average of 53 years old, who had experienced heart attacks that had left them with damaged heart muscle. Eight patients served as controls and were treated with conventional treatments including medication, and diet and exercise recommendations. The other 17 patients received stem cells, which researchers derived from raisin-sized pieces of patients' own heart tissue.

The researchers found that patients treated with stem cells experienced almost a 50 percent reduction of heart attack scars within 12 months of treatment, while the eight patients who received conventional treatment saw no reductions in damage.

"This has never been accomplished before, despite a decade of cell therapy trials for patients with heart attacks. Now we have done it," Marban said. "The effects are substantial, and surprisingly larger in humans than they were in animal tests."

The study is published online in the Feb 13. Issue of The Lancet.

One of the 17 patients in the study, 59-year-old Fred Lesikar of Menifee, Calif., said his major heart attack reduced his heart function by more than 30 percent.

"The doctors treating me told me that there was no way to repair a heart damaged by a heart attack," he told Cedars-Sinai. But then he saw a news report on the study and called Cedars-Sinai, asking to be a part of the trial. "Today I'm feeling super - better than I did before the heart attack."

Dr. Sonia Skarlatos, deputy director of the division of cardiovascular sciences at the NIH's National Heart, Lung, and Blood Institute, told CNN that the procedure needs to be tested on more patients before it rolls out to the public, but remains hopeful it can improve quality of life for heart attack patients.

She said, "By preventing the consequences of a heart attack you may be able to prevent further down the heart failure that happens in [many of these] patients."

In November, the stem cell procedure was profiled on the CBS Evening News.