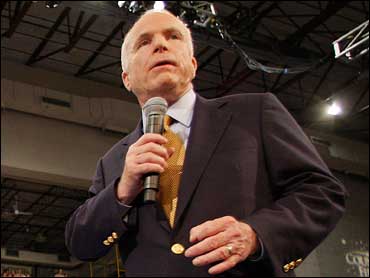 Some of the nation's top embryonic stem cell research advocates say they are growing concerned that Sen. John McCain will backtrack on his previous support for the work if elected president.

The Republican senator from Arizona has supported lifting President Bush's ban on using federal money to create new stem cell lines from surplus embryos and to award more grants to researchers studying them. His rival for the presidency, Illinois Sen. Barack Obama, has a similar position on the research that holds promise to treat a range of disease.

The agreement has helped make the research less of a hot-button issue this cycle than it was in 2004 and 2006, when Democrats argued President Bush's stance was cruel and anti-science. Social conservatives who oppose the work because it involves the destruction of days-old human embryos rallied behind the GOP.

But advocates who will gather in Madison this week for the World Stem Cell Summit say recent developments make them question what McCain would do if elected president.

They note the Republican Party adopted a platform at its national convention opposing even private funding for research on surplus embryos, which is currently allowed; McCain selected Alaska Gov. Sarah Palin who has opposed the use of embryos in research as his running mate; and his stance has been less than clear in recent weeks.

"Three or four months ago, I felt fairly certain that we were through with the federal ban. Now I'm not so certain," said Jeff Sheehy, a spokesman for the AIDS Research Institute at the University of California-San Francisco. "I can't really tell where McCain stands but we hope he keeps his commitments."

Mr. Bush's 2001 policy limits federal funding to researchers studying embryonic stem cell lines that were already in existence. Researchers say the policy has stunted their progress toward developing cures for some of the worst diseases.

McCain's stance is getting followed closely in Madison, where University of Wisconsin scientist James Thomson was the first to isolate human embryonic stem cells that can grow into any type of tissue in 1998. The university remains at the forefront of the field and the city's National Stem Cell Bank distributes lines approved for funding under Mr. Bush's policy.

At next week's summit, hundreds of the nation's top researchers, advocates, philanthropists and investors in stem cell research will gather to chart the future of the field. The agenda includes discussing how the field might change when the next president loosens federal restrictions as researchers hope.

McCain voted in 2006 and 2007 for bills that would increase federal funding for the research, including studies that involve leftover embryos set for destruction at in vitro fertilization clinics. Mr. Bush vetoed those plans.

McCain campaign spokeswoman Sarah Lenti said he still supports easing federal restrictions and "his position hasn't changed." But she declined to say specifically what McCain would do if elected. Obama has promised to loosen the restrictions and double National Institutes of Health Funding over 10 years.

McCain and Palin have recently argued that breakthroughs in which scientists have coaxed adult cells into having the qualities of stem cells without destroying embryos may make the controversial research unnecessary. Scientists dispute that, saying embryonic stem cell research remains the most promising avenue for developing human therapies.

"That response leaves open the question of what McCain would do on day one in office," said Alta Charo, a University of Wisconsin bioethicist who will speak at the summit. "What is John McCain's position today? I don't know."

Despite the ambiguity, McCain is running radio ads promising he and Palin would support "stem cell research to help free families from the fear and devastation of illness."

"If McCain backs away from his prior support, it will not be popular with disease activist groups or people who have sick people in their families," she said. "On the other hand, if he doesn't say that, it will irritate the people who support him from the socially conservative part of the base. He would rather not have to say anything on this."

Tim Kamp, a UW-Madison researcher who is co-chairing the summit, said he still believes the political climate for the work is more favorable than the past. Part of the summit's goal is to chart a bipartisan path forward, he said.

"It doesn't seem to be quite as much of a wedge issue as it has been in some past elections," he said. "We're hopeful the situation may improve for allowing more cell lines to be studied."