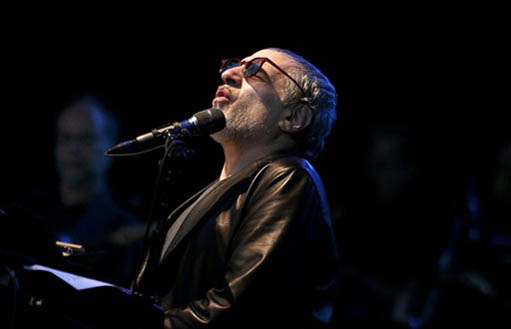 NEW YORK -- Steely Dan founder Donald Fagen was charged Tuesday with assaulting his wife at their Manhattan home, according to law enforcement officials and court papers.

The 67-year-old former lead singer allegedly shoved Libby Titus into a marble window frame, knocking her to the ground Monday afternoon at their Upper East Side apartment. The assault caused Titus, 68, to "suffer bruising and swelling to her right arm, as well as substantial pain," according to the criminal complaint.

The two officials were not authorized to disclose the victim's name and spoke to The Associated Press on condition of anonymity.

Fagen was charged with misdemeanor assault and harassment. His publicist had no comment.

He launched the band Steely Dan in 1972 with guitarist Walter Becker. The group was inducted into the Rock and Roll Hall of Fame in 2001 and is known for such '70s tunes as "Reelin' In the Years" and "Rikki Don't Lose that Number." Steely Dan has sold more than 40 million albums worldwide.

Becker and Fagen are scheduled to perform an eight-night residency at New York's Beacon Theatre starting Oct. 6 with a newer iteration of the band.

Titus is a producer, actor and songwriter and put out two albums in the late 1970s with producers Phil Ramone, Paul Simon, Carly Simon and Robbie Robertson.

Fagen was released without bail Tuesday after a brief court appearance. He was ordered to stay away from Titus.