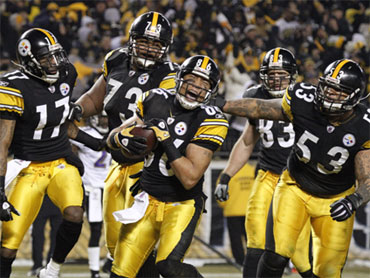 PITTSBURGH - Ben Roethlisberger hit rookie Antonio Brown on a 58-yard pass play on third-and-19, and Rashard Mendenhall scored from the 2 with 1:33 remaining to give the Pittsburgh Steelers a 31-24 comeback victory over the Baltimore Ravens in an AFC divisional playoff game Saturday.

The Steelers, 9-0 against division teams in the playoffs, advance to their fifth AFC championship game in 10 seasons next Sunday - at New England if the Patriots beat the Jets on Sunday, in Pittsburgh if the Jets win. They will be play to reach the Super Bowl for third time in six seasons.

The Steelers (13-4) were trailing 21-7 at halftime after turnovers created two Ravens touchdowns. But they came back with the help of three Baltimore turnovers in the third quarter. It was so bad, the Ravens' minus-4 yards in offense wasn't the worst of it.

Baltimore was outgained 263-126 as Joe Flacco was 16 of 30 for 125 yards as the Ravens became the eighth team in NFL playoff history to fail to gain at least 100 yards in the first three quarters. All eight teams lost.

The Ravens' last chance to beat the Steelers - they haven't in three postseason tries - ended when T.J. Houshmandzadeh dropped Flacco's fourth down pass at the Steelers' 38 with 1:03 remaining.

Failing to protect the ball cost the Ravens - even after they scored two touchdowns in less than 30 seconds in the first half.

With Baltimore up 21-7, Ryan Clark forced a rare fumble by Ray Rice on a screen pass, and LaMarr Woodley recovered at the 23. The play re-energized the crowd of 64,879 that had grown silent as Baltimore opened its two-TD lead.

Mendenhall ran for 14 yards before Roethlisberger's 9-yard scoring pass to Heath Miller, who missed two games after sustaining a concussion on a hit by Jameel McClain during the Steelers' 13-10 win in Baltimore last month.

Later in the quarter, Flacco overthrew tight end Todd Heap, and Clark returned the interception 17 yards to the 25. Three plays later, Roethlisberger found ol' reliable Hines Ward, absent in the offense most of the day, for an 8-yard touchdown pass and it was tied at 21.

Along the sideline, the Ravens had the look of a team that couldn't believe it had squandered the lead - and couldn't figure out how to get it back. They never did.

Roethlisberger went 19 of 32 for 226 yards as he beat the Ravens for the seventh successive time in a rivalry in which both teams had won twice by 3-point margins during the last two seasons. The asterisk: Roethlisberger didn't play in either Steelers loss.

Baltimore turned it over for the third time in nine minutes as center Matt Birk snapped the ball early to Flacco, who never got his hands on it, and Pro Bowl defensive end Brett Keisel recovered at the 23.

The drive stalled, but Shaun Suisham, who had missed earlier, converted a 35-yard field goal with 12:15 remaining to give Pittsburgh its first lead since its opening drive at 24-21.