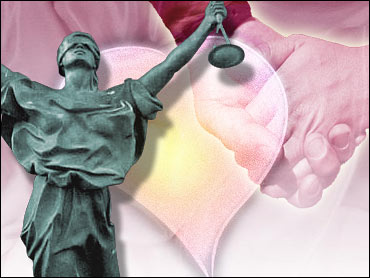 The Missouri Supreme Court struck down the state's "alienation of affection" law, saying that "stealing" the love of a married person is an antiquated legal doctrine.

The court, in a 5-2 decision Tuesday, agreed with a woman accused of marital infidelity that alienation of affection is an antiquated cause that has no place in a modern legal system. The justices struck down the law and overturned a lower court's $75,000 judgment against her.

The woman, Sivi Noellsch, was sued by Katherine Helsel for allegedly having an affair with Helsel's husband, David, who eventually filed for divorce. Helsel cited alienation of affection as the reason for her lawsuit.

In 2001, a Buchanan County jury found in favor of Helsel and awarded her damages, the $75,000 from Noellsch. Noellsch and David Helsel have since married.

"The cause of action is gone, the claim is gone, my client can go on with her life," said Noellsch's attorney, Dennis Owens.

In its opinion, the court wrote that alienation of affection has its roots in English common law and was adopted by many states in the 19th century. Today, it is cause for legal action in only eight states: Hawaii, Illinois, Mississippi, New Hampshire, New Mexico, North Carolina, South Dakota and Utah.

In a similar North Carolina lawsuit, the state Court of Appeals ruled Tuesday that compensatory damages of $910,000 were excessive against a doctor who had an affair with a coach's wife. The court, however, upheld punitive damages of $500,000.

The North Carolina House approved a measure doing away with alienation of affection, but the bill is bogged down in the Senate, where it is unlikely to pass.

Alienation of affection is grounded in the outdated idea that married people have property interests in each other and its present-day interpretation does nothing to preserve marriages, Judge Richard Teitelman wrote for the majority.

The lawsuits are usually filed after the marriage is broken, so revenge - not reconciliation - is often the primary motive, Teitelman wrote.

"Most lawyers would have predicted this," Ken Jones, editor of Missouri Lawyers Weekly, said of the decision. "It really brings Missouri into the 21st century."