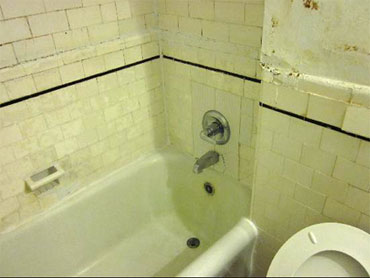 The Grand Resort Hotel & Convention Center is the filthiest hotel in America, according to ratings compiled and released by the travel review site TripAdvisor.

The historic Smoky Mountains hotel in Pigeon Forge, Tenn., was graded "terrible" by 161 of 224 reviewers on the site. Twenty-six called it "poor" and 15 gave it an "average" grade.

"This is a nasty place, would not let my dog sleep there," reviewer LaFolettePat wrote last week under the headline "health inspector please."

JordynC's assessment: "If you are looking for a hotel with: pubic hair stuck to the bathroom floor in some unidentifiable, gelatinous liquid; chewing tobacco spit oozing down the halls and corridors; spiders actively making webs in every corner of your room; carpeting so greasy and dirty you wouldn't want to sit your luggage down - let alone walk around barefoot; dingy bedsheets and towels as rough and thin as sandpaper; and a room so putrid and smelly it causes a gag-reflex when you walk in... by all means, stay at The Grand Resort."

The Grand took No. 1 in TripAdvisors' sixth annual top-10 ranking of dirtiest hotels in the U.S. There are separate rankings for Asia, Europe and India.

Spokeswoman Courtney Keck told USA Today's Laura Bly that the ignominious award is "a startling and unsettling issue that the company is taking very seriously, (and) the Grand Resort Hotel Group has already begun taking the steps necessary to restore this once great property."