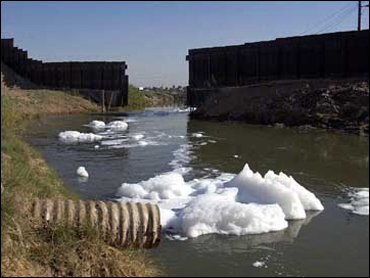 Friends of the Earth and the Environmental Working Group say these states have allowed critically important water pollution permits to expire, effectively issuing industries a license to pollute.

The review also concludes that there is currently little action afoot to correct this serious problem. Nevada, Rhode Island, Oregon and Nebraska all had more than two-thirds of their permits expired. Texas had the largest number of expired permits at 135.

Bob Huston, chairman of the Texas Natural Resource Conservation Commission, feels the review is misleading. "Texas is big. We're going to be at the top of a lot of lists because we're large. We have a lot of everything," he tells CBSNews.com.

"The important issue here...is that there are no uncontrolled facilities out there. They have a state permit. They still have to comply with the federal permit even though it has expired."

"Just because that permit has expired, does not allow them to operate outside of that permit."

We also have in-house applications for renewal from the permittees, and we will eventually issue new combined federal and state permits - a single merged permitting program," says Huston.

Scott McClellan, spokesman for the Bush Campaign said that water quality in Texas is improving under Governor Bush. "More than 97% of our public drinking water meets all standards," he told CBSNews.com. "That's up from 88% when Gov. Bush took office. And Gov. Bush successfuly fought for millions in increased funding for water quality programs."

Louisiana had the second highest number of lapsed permits, 116; and Ohio, California and Indiana rounded out the top five with 96, 85 and 81 expired permits respectively.

Under the Clean Water Act (CWA), the nation's cornerstone water pollution law, permits must be renewed at least every five years. With each new permit, the pollution limits are lowered toward the eventual goal of zero pollution.

The findings come amidst growing concern among environmental groups that governors of many states and the EPA are not enforcing basic pollution laws. Without up-to-date permits, environmentalists say, states handcuff their environmental enforcement staff.

"If you or I were driving a car or operating a small business without a valid, up-to-date license, we'd be fined or arrested. Factories and sewage treatment plants should not be allowed to operte with expired permits," said Larry Bohlen, director of health and environment programs at Friends of the Earth. "Government officials need to do their jobs and get these permits up to date."

"Industries and their allies in state governments will whine about the costs of permitting. The fact is that up-to-date permits give businesses the opportunity to modernize the way they control their waste stream, which saves them money," said Velma Smith, report author and FoE senior analyst.

How does your state rate? The Clean Water Report Card report is available on the web at Friends of the Earth