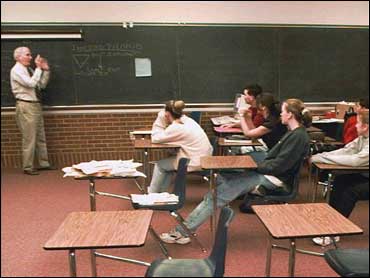 As report cards go, it is a spotty mix of promising and abysmal grades. But an independent review praises the states for progress given the scope of their assignment — putting in place the most sweeping education law in decades.

Most states have met or are at least on the way to meeting 75 percent of the major requirements of the No Child Left Behind law, according to the nonpartisan Education Commission of the States. That level of compliance has more than doubled over the last year.

Every state and the District of Columbia, for example, have a policy to ensure that students with disabilities are included when their schools test reading, math and science.

But not a single state is on pace to fulfill the law's requirement of having a measurable way to ensure a highly qualified teacher will be in every core academic class in 2005-06.

Overall, the states are doing well in areas of testing students and measuring yearly progress, but they're struggling with requirements designed to improve the teaching corps.

"The hardest work is yet to come," said Kathy Christie, vice president of the ECS Clearinghouse, the commission's research and information arm. "The toughest thing in all of this is going to be getting better at actually raising student achievement."

The 2001 law requires expanded standardized testing, more information and choices for parents, and public reporting of progress for every demographic group so the scores of struggling students aren't masked by school averages. Schools that get federal poverty aid but don't make enough yearly progress get help but also face mounting sanctions.

ECS, a Denver-based group that advises state leaders, graded states on 40 elements of the law, from how well parents get information to how well struggling schools get help.

The determination of whether a state is on track varies by topic. Some changes under the law were supposed to have happened already, while some have deadlines in coming years.