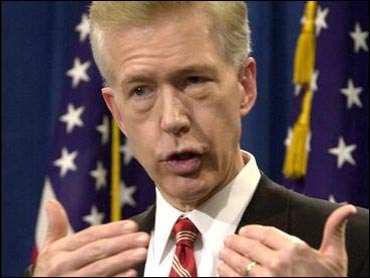 The already grim financial health of state governments is worsening, with tax revenues falling and budget gaps widening during the first half of the current fiscal year.

Over the next year, states will face a combined budget gap of more than $94 billion.

Most states are considering tax increases, as well as more cuts to bridge the difference between weak tax revenues and the money needed to run government.
But a report by the National Conference of State Legislatures being released Tuesday concludes there is "no immediate end in sight" to severe budget troubles.

Among the dismal findings in the report, compiled from data collected during the first six months of the fiscal year that began July 1:

"The numbers are staggering," said Corina Eckl, head of the bipartisan conference's fiscal program. With estimates for 2004 incomplete for 11 states, the gaps probably will be even larger when final numbers are in, she said.

The report came a day after President Bush gave Congress his $2.3 trillion spending plan for the 2004 fiscal year starting Oct. 1.

In response to the states' requests for more federal aid, particularly for Medicaid and for new anti-terrorism initiatives, Mr. Bush proposed to give states more latitude in spending federal money for Medicaid, which provides health coverage for the poor, and for Head Start preschools in low-income neighborhoods.

His budget projects federal grants to state and local governments to rise nearly 4 percent next year to $398.8 billion, about 18 percent of the federal budget.

More than $18 billion of the increase, however, is in mandated benefit programs such as Medicaid — a program whose costs the federal and state governments split.

For discretionary grant programs, Mr. Bush is asking Congress to cut what it appropriates for state and local governments to $154.1 billion, compared with $157.8 billion this year.

Besides his spending priorities, the president's tax plan might also hurt states that base their income taxes on the federal definition of taxable income. One report estimates that the president's plan to eliminate the tax on stock dividends could cost states $4.3 billion.

States already have taken sweeping actions to deal with their plight, from massive layoffs of state workers in Connecticut to early prison releases in Kentucky. Oregon is considering canceling days of school.

To bridge budget gaps, many states used their rainy day funds, others money from the nationwide settlement with the tobacco industry. Every state but Vermont faces a constitutional requirement to balance its budget.

For all but four states, the 2003 fiscal year began in July. Twenty-nine states so far imposed across-the-board budget cuts, with eight states laying off workers. Others cut programs in elementary and higher education, Medicaid and corrections.

Projections for tax revenues, the fuel that runs state programs and services, were too high in at least 30 states, even though all scaled them back as the economy worsened.

Next year promises to be worse, the report found. Again, 36 states reported they expect a shortfall next year, and half of them said it would equal at least 10 percent of their budget.

For many states, the problems are the result of three trends. First, states enacted tax relief during the boom years when revenues soared, giving them less capacity for raising money now that incomes are down.

The problems stretched nationwide. In California, a conservative estimate of next year's gap equaled 30 percent of the budget; in New Jersey, the budget shortfall equaled 18.5 percent. Minnesota's is 15 percent.

Eckl said the shortfalls since the economy began weakening in 2001 add up to $180 billion, with the total likely to break $200 billion by the year's end.

In contrast, states cut $35 billion in taxes over the course of seven boom years during the 1990s; last year, states raised taxes overall by $9.1 billion.

The question now is what can states do to get through the tough times.

The report found that tax increase proposals are being considered in 24 states; at least 14 will consider higher cigarette taxes, while six are weighing higher taxes on alcohol. Six states are looking at sales taxes, four at income taxes.

"There are lawmakers across this nation who promised as part of their platforms that they wouldn't raise taxes," Eckl said. "Now they'll have to see if they can abide by those promises."

Last year, Nebraska lawmakers approved temporary increases in sales and income taxes. Now, they're weighing severe cuts in services against extending those increases for another year or adding new taxes.

"It's every bit as bad as we've ever seen," Nebraska state Sen. Roger Wehrbein said.