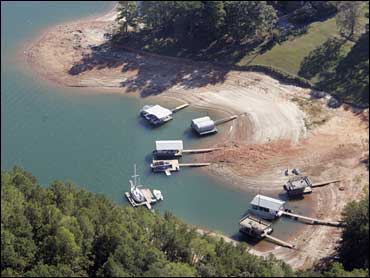 With water supplies rapidly shrinking during a drought of historic proportions, Georgia's governor declared a state of emergency Saturday for the state's 85 northern counties, and asked President Bush to declare it a major disaster area.

"We need to cut through the tangle of unnecessary bureaucracy to manage our resources prudently - so that in the long term, all species may have access to life-sustaining water," he said.

Georgia officials warn that Lake Lanier, a 38,000-acre reservoir that supplies more than 3 million residents with water, is less than three months from depletion. Smaller reservoirs are dropping even lower.

On Friday, Perdue's office asked a federal judge to force the Army Corps of Engineers to curb the amount of water it drains from Georgia reservoirs. That water is sent downstream, down the Chattahoochee River, to neighboring Alabama and Florida for needs there, including a power station, as well as to keep water levels up for some endangered species.

The state declaration creates an emergency team that will oversee the state's response to drought; it also could free up some state money to respond to the water woes.

Perdue added that the state has not yet formed a contingency plan in case the reservoirs run dry.

"The backup plan is to conserve and use our water wisely," he said.

However, Perdue says he's confident there will be "a solution that will benefit all of Georgia's interests for years to come."

"This is not something we can conserve our way out of," said Lt. Gov. Casey Cagle, a Republican from Gainesville, the biggest city on Lake Lanier.

More than a quarter of the Southeast is covered by an "exceptional" drought - the National Weather Service's worst drought category. The Atlanta area, with a population of 5 million, is smack in the middle of the affected region, which encompasses most of Tennessee, Alabama and the northern half of Georgia, as well as parts of North and South Carolina, Kentucky and Virginia.

Georgia was placed under statewide water restrictions in April that limited outdoor watering to three days a week. By May Atlanta allowed watering only on weekends.

Now the state is enforcing mandatory outdoor water restrictions seven days a week - no lawn watering or car washing between 10:00 a.m. and 10:00 p.m. CBS News correspondent Jennifer Miller reports that patrols are going around neighborhoods looking for people violating the watering ban, issuing warnings and in some cases turning off their water. Violators would have to pay a $1,000 fine to have their water turned back on.

CBS News correspondent Sam Litzinger said there are some reports of people turning in neighbors who are violating the ban.

Peter Frost, executive director of the Douglasville-Douglas County Water and Sewer Authority, explained his office's "zero tolerance" policy: "The minute we see it, if it's in the middle of the night, we won't going to knock on their door, we'll just turn it off," he told CBS Affiliate WGCL correspondent Rebekka Schramm.

Fifteen violators have already had their water shut off.

Many businesses are taking a hit from the drought. Mike Chapman, of Pike Family Nurseries, told Schramm, "This time of year we're normally ramping up, hiring more people, getting ready for the fall planting season. This year we're not doing that.

"We're maintaining our employees, we're not letting anyone go, but we're not ramping up."

The nursery is steering customers to plants better able to weather a drought, like knockout roses, and properly mulch to allow soil to retain moisture better.

With Lake Lanier 14 feet below normal, recreational companies are suffering, too. Miller said people are not going to resorts and out on boats, and marinas and boat dealers are losing business.

State climatologist David Stooksbury said it will take months of above average rainfall to replenish the system.